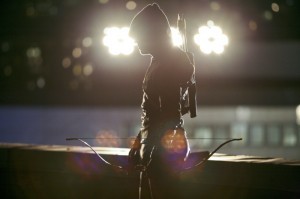 Summary: A well-plotted episode that deepens the overall story while revealing key aspects of Oliver’s character not only to the audience but to Oliver.

After saving Diggle’s life and revealing himself as the vigilante, Oliver asks for Diggle to join him in his fight. When Diggle quits, Oliver turns to Laurel to help him free a man falsely accused of the murder of his wife who worked for one of the men on his father’s list. Laurel opens up to helping the hooded man, drawing her father’s ire, but sees the dangerous side of the man when he saves her from an attack. As Diggle decides to help Oliver, Detective Lance finds evidence that links Oliver to the hooded man and arrests him.

For a full recap of the episode, please visit our handy <a href=”episode guide.

This was an episode about consequence. The consequence of one’s actions, of ones choices, of one’s beliefs and the experiences that forged them. Perhaps for the first time, the flashbacks to Oliver’s trials on the island really played well into the main story rather than giving some background on what happened to him. By contrasting that first moment when Ollie was forced to kill for survival with the moment when Laurel has to stop him from pummeling Brodeur’s man to a pulp was very effective to show the toll this quest has on him. Oliver isn’t just someone who found a purpose during his five lost years, he’s gambled his very soul to repent for the sins of his father.

It’s been mentioned before but the single best relationship on the series so far has been between Oliver and his bodyman John Diggle. That relationship was given an enormous boost forward in a surprisingly organic fashion. Rather than shuffling Diggle off to recuperate, Oliver reveals himself and his mission to the man, asking for Diggle’s help. So often in these types of stories, the hero martyrs himself in a lonely quest that he feels he and he alone is either qualified for or cursed to. In an effort to stick to the mantra of “realism,” Oliver recognizes he can’t do this alone and it’s a smart move for a series that is readily showing a lot of care and consideration for its narrative and its characters.

That Diggle didn’t immediately jump at the opportunity Oliver presented him, holding true to his moral code, but also didn’t completely disappear or take an unnatural amount of time to make the decision to stand with Oliver is a testament to the strong story breakdown on the part of the showrunners. To be honest, the speed with which the season is progressing makes this feel more like a mini-series than a long-form one, and yet it feels earned. What’s more, Diggle’s waffling and then acceptance as a matter of keeping Oliver’s moral compass in check played beautifully with the given themes of this episode.

Consequence also plays into the interaction between Laurel and her father, Detective Lance. Some have questioned whether it is believable that Paul Blackthorne could be seen as Katie Cassidy’s father given their real-life shorter age gap. Yet, this episode showcased just fine the familial connection the two have, in addition to giving great insight into how each views justice. Lance’s anger at his daughter using him to aid the vigilante was certainly informed by his crusade against the hooded man, but also strongly rooted in his ideals about the system to which he’s dedicated his life. Blackthorne played wonderfully that layered sense of betrayal in the scene when he confronts Laurel about her ill-gotten evidence.

Laurel, in turn, might have been scared by the “Guardian Angel” but she recognized what piece he can play in finding true justice that will come to have a lasting impact on her life in the future. For the first time, Oliver employs Laurel in his hooded disguise and it was a nice character driven turn on an old cliche of superhero stories. Instead of just partnering with the “damsel” to accomplish a mission goal, Oliver was opening the real part of himself up to the love of his life, something that brings true joy to his life for the first time in his return.

That letting down of his guard, in a sense, also drove home Laurel’s concern about just how swallowed in the darkness Oliver has become. To her, she knows nothing of this hooded man but she believes he is trying to do some good, something that offers Oliver some acceptance and perhaps even rationalization. That’s what cut to the bone about Laurel’s observation and, though he tells Diggle he doesn’t need to be saved, it appears he recognizes that he needs some type of tether to the world to retain his soul. It’s all the heady part of the discussion of superheroes and vigilantes and quite a welcome avenue so soon in the series.

It’s also a great set-up into Oliver’s first challenge against his dual identities. One of the best aspects of this episode was how it rolled immediately out of the last beats of the preceding episode. Even more so is the fact that they pulled no punches or waved no wands in regard to Oliver’s identity, which would’ve shortchanged the intelligence and credibility of Detective Lance. It was actually a bit surprising to see how easily they could make a connection between Oliver and “the Hood” with the right inspiration but it was also a very honest process. The discovery grew out of story rather than forcing it to happen and the arrest at the end of the episode was a superb coda to a very well-made episode throughout. In essence, it was a proper consequence of events that had come before it.

Stephen Amell gives his best performance on the season so far, feeling thoroughly committed, convicted and lived in as Oliver. Blackthorne and Cassidy also turn in top nothc performances and David Ramsey continues to shine. What’s even better is the supporting players that are feeling more settled and part of a breathing world. From Thea to Walter to even hyper techie Felicity Smoak and Diggle’s sister-in-law, everyone felt like they belonged and contributed to a believable world, which makes the future of the season even more exciting. Even temporary bodyman Rob Scott was a game player, as well as being a perfect foil for most of the humor of the episode.

Overall, “An Innocent Man” builds upon the confidence that was instilled in last week’s episode.

After a few weeks of shakiness, things seem to be coming together much better for the fourth installment. We aren’t treated with an big action plot this time around, but instead get loads of character interaction and development. The main idea of what lines must be skewed for justice (and conversely on the island, survival) is a strong theme, and a much better and more ambiguous one than the show has been carrying thus far.

It’s impressive how well the show has managed to keep Laurel included in the Green Arrow plots without feeling like she’s a shoehorned-in love interest. Making her an attorney is proving to be one of the smarter decisions. Her arc was particularly effective, pumping up the typical Lois/Superman or Spider-Man/MJ relationship between Laurel and Green Arrow for most of the hour, only to collapse it in the last second. Having Laurel conclude that Green Arrow is not the good guy because of his murderous rage is a great twist and still felt natural. (Though, I do find it hard to believe she couldn’t recognize Stephen Amell’s distinct eyes under that ski mask if she looked into them so deeply.)
The reveal of the Queen’s Gambit boat was also a surprising twist, particularly for Walter finding it. It’s going to be great giving Susanna Thompson and Colin Salmon more to do. The Lance father-daughter relationship is also proving to be an increasingly engaging part of the show; Paul Blackthorne and Katie Cassidy have wonderful familial chemistry.

John Ramsey wasn’t featured too much despite the big reveal last week, but he and Oliver’s discussion in the diner is a highlight of the episode. Amell himself was much more enjoyable to watch than he has been, likely due in part to—like Thea pointed out—actually being able to smile a little bit. Coupled with what may be the elimination of the voiceovers, it seems that the show is improving on many of its biggest flaws.

Of course, the final cliffhanger—with Detective Lance outing Oliver—is not only surprising, but kind of uncomfortable given how we’ve barely taken hold of the status quo. It’s probably going to be undone next week, but the question is: could the show be moving too fast? On one hand, the constant shift of the status quo and its breakneck speed are an advantage at keeping things interesting. But burning off all these stories so soon could lead to problems in the long term.

However, if the showrunners have enough foresight and know where they want to go, then I’m in favor of keeping up this speed—it’s doing better than any other show this season at keeping me wanting to come back.