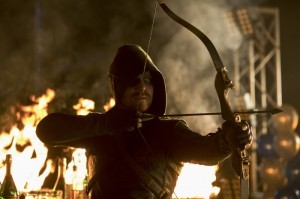 Summary: A sharp episode that offers reflection for our hero and a compelling antagonist who doesn’t want to watch the world burn as much as the men who left him behind.

Oliver physically recovers from his confrontation with the Dark Archer but worries that his activities as the vigilante might take him from his loved ones again. Diggle tries to convince him that having those that care about him is not a weakness or hindrance. Meanwhile, Joanna’s firefighter brother is killed by a former fireman once left for dead in a horrific blaze. Laurel asks the Arrow to help catch the guy.

The question coming out of the winter hiatus was whether or not the show could maintain its momentum from the midseason finale “Year’s End.” The answer is an unqualified and resounding yes. With some of the strongest two-person interactions and perhaps the best use of the Lance characters to date, “Burned” was, pardon the expression, firing on all cylinders.

Foreknowledge that Oliver (Stephen Amell) was going to be questioning his effectiveness as the vigilante after the sound beating he took from the Dark Archer, aka Malcom Merlyn (John Barrowman), set up an intriguing premise. Yet, the show went in a different direction with this dilemma. Instead of a fear of not being good enough, Oliver’s hesitation to get right back on the horse, despite his admirable and feisty physical recovery, was a crisis of conscience in relation to the the people in his life that he could now hurt by getting harmed or killed in the line of his heroics. It was a nice play on the “protect those closest to you” trope that permeates superherodom and a compelling curveball on the writers’ parts.

What’s more, it gave an opportunity for Diggle and Oliver to address his quest in an organic way. Honestly, one can’t help but be a bit surprised at how whole-hog Diggle (David Ramsey) has gotten into Oliver’s mission. Reluctant to sign on because of the outlaw aspect, Diggle is now firmly in the camp that “the Hood” needs to be out there fighting the good fight. His conviction this episode, aside from needing an opposing force to push Oliver in the opposite direction of his rattled instincts, actually seemed to eclipse Oliver’s and that is fascinating in its own right. Diggle, much like Felicity Smoak, is someone who can get things done and he proved his effectiveness throughout the episode. Beyond that, we got to experience some of the best connective dialogue between Oliver and Diggle. This wasn’t Diggle moralizing, as he’s been wont to do. This was two partners, two minds connecting and melding philosophies. Dare say, for the first time, it felt like two people of a shared passion and drive on the same path.

The show finally makes significant use of supporting character Joanna de la Vega (Annie Ilonzeh) … only to cart her to offscreenville. It was good to have another voice in the mix on the show, especially when it was related directly to the A plot and not just interstitial chiming in on relationship foibles. The series could do with fleshing out supporting characters in an effort to widen the world and allow everything to breathe and live. A show should have its main focal characters but can sometimes leave the audience feeling trapped in a box when it is so insularly focused on those few people. Laurel’s best friend Jo has rarely made much of an impression on the series thus far, which has served to limit the scope and effect of Laurel’s work with CNRI. Of course, once they take a moment to de-marginalize a marginal character, they ship her off out of town. Still, this is not without some effective work, and the scene where Jo hands Laurel her brother’s badge to give to the vigilante in appreciation was one of those small, surprising, honest and emotional moments the series does so well.

By making Jo prominent in the story, it allows the episode to shine much needed light on Laurel. Shine she does, as Katie Cassidy proves her capability when given more to do. Not only is it Cassidy’s best performance so far but it’s an episode that has featured the most personality of the character, with drive, intention, and passion all firmly on display. While we still have to address Laurel the love interest pawn as they continually paint her — though, to be fair, the “drawer” subplot with Tommy (Colin Donnell) was fairly innocuous and keyed to demonstrating certain of her traits — she is primarily driven by her friend’s case this time around and it does wonders for the character’s inclusion. It pleads well for the case that Laurel needs to do more outside of her relationships and one hopes the showrunners have really taken note of that.

Setting Laurel up with the “red phone” to be in direct connection with the vigilante is also a smart move. Not only does it affect Oliver’s moral code and sense of justice, but it gives Laurel a fast track to be more hands on in his activities. The producers are on record with charting a course for Oliver that grows him from vengeance into justice-based heroism. With Diggle as Ollie’s conscience and guide, Laurel can now be looked at as his “agent,” in a way, introducing him to cases outside of the list that will steer him along that path. It also gave us fabulous interaction between daughter and father, establishing stronger familial chemistry between Cassidy and Paul Blackthorne. The fact that Detective Lance would use his daughter as bait to catch the “Hood guy” adds further levels not only to their relationship but to Lance’s own personality. Between “Year’s End” and “Burned,” the detective is becoming a much more interesting character.

Speaking of interesting characters, one would be remiss without offering praise to guest star Andrew Dunbar and his turn as fractured fireman Garfield Lynns. Though some might complain that the antagonist was given very little screen time, the episode makes adroit use of the baddie as boogeyman, showing the effect he has on our cast more than focusing on him committing his crimes. This gives Oliver’s first confrontation added weight to sell his trepidation and keeps us from being overly familiar with the man before his arrival at the benefit at Ollie & Tommy’s club. The reveal of the scarred Lynns was all the more powerful by holding it back and Dunbar does fascinating work in managing a fully realized performance in such short face time. By centering his storyline on the fire captain who was once part of Lynns’ crew, it gave it appropriate emotional depth and vocalized Lynns’ motivation without having to dwell on flashback or character self-exposition. In short, little Firefly went a long way and the story was better for it. Kudos also to the makeup team for stunning work.

Featuring sharp acting throughout, particularly the work between Amell and Ramsey and also Susanna Thompson as a Moira weighed down by her dark choices; skillful plotting; efficient use of characters; and deft writing, Arrow storms back in agile form.

“Burned” functions incredibly well as a return from hiatus. We’re reintroduced to the basic concepts of the show, but in a way that doesn’t seem like repetition. Specifically, we have to follow Oliver as he gathers his bearings in the aftermath of “Year’s End.” This mental journey is something he’s needed all season; he’d been far too confident thus far, so having his weakness be exposed shines a light on his character and brings up his likeability quite a bit. This little journey is also multifunctional, in that it turns focus to the importance of family and friends, helping another issue the show had been having: an emotional disconnect. Acknowledging the need for family and human relationships, sappy it may be, is an important theme for the show as it’s been set up, and any time it’s addressed directly, it’s worked.

We got another comic book-y feeling villain this week, but like Dark Archer, this version of Firefly felt more integrated into the world than the colorful Deadshot and Deathstroke. The fireman suit with a turpentine-shooting spray was a clever parallel to his costume and flamethrower in the comics. Andrew Dunbar didn’t get a ton of screen time as Garfield, but did fine with what he was given. Though the make-up was solid for his burns, it might have worked better had they been a bit more exaggerated or over-encompassing to make his situation more horrifying (and him simultaneously more monstrous and sympathetic.) Either way, it worked fine for what it was. Having a less mythology-ridden plotline also helped keep things light and focused on the characters.

All the supporting characters were utilized better than in the past few episodes, contributing either to the main plot or to Oliver’s mini arc, while still developing on their own. Diggle’s constant nudging stood out (as usual), and Laurel got some good material here. There’s still work to be done to really carve her out as someone special—and Katie Cassidy needs to give her a little more spunk, too—but having her in the heat of things here (pun intended) and taking charge is a step in the right direction. The stuff with her father is also intriguing, though I fear going down this “chasing the white whale” route could make Quentin too unlikeable even in spite of Blackthorne’s performance. Tommy, however, is on an upward slope of likeability. And it’s nice to see Thea actually using her super-judgment powers on Moira instead of Oliver (and her attitude worked much better in this case than it has in the past.)

Where the episode falters is some clunky dialogue and odd editing at times. Though Diggle’s material was good, David Ramsey seemed to have some trouble with the wordiness of his speeches, which occasionally came off more stilted and comic book-y than even Geoff Johns’ episodes. There were also quick, odd-feeling close-ups during certain scenes (in Laurel and Tommy’s scene in her apartment, for example) that felt amateur at times. The island flashbacks were, again, somewhat superfluous here too; they’re telling a continuing story that will lead to something, but it’s all just filler at this point that, frankly, we could gather through a time skip. We don’t need to see every detail of his time on the island, and outings like this feel like padding.

But in spite of this, there isn’t much to complain about. It was a fun, basic hero vs. villain outing, but also proof that the show can function just fine without having the list plot to fall back on.