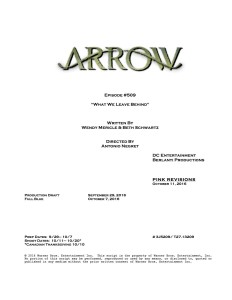 Executive Producer Marc Guggenheim has revealed the title and episode credits for the ninth episode of Arrow Season 5.

The episode is called “What We Leave Behind” and it’s written by Wendy Mericle & Beth Schwartz. (Which means we had better get a good #TextsFromMom from Beth on that night!) Previous GATV Awards winner for Favorite Director, Antonio Negret, is the director.

Read some Season 5 spoilers on our Arrow Spoilers Page!