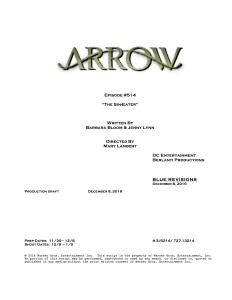 The title and credits for the 14th episode of Arrow Season 5 have been revealed!

Episode #5.14 is called “The Sin-Eater,” and we doubt that title means that we’ll see the return of Bex Taylor-Klaus as Sin though that would be amazing.

What is quite impressive is that this episode — which is now starting production — is written and directed by women! Barbara Bloom & Jenny Lynn wrote the episode which is being directed by Mary Lambert.