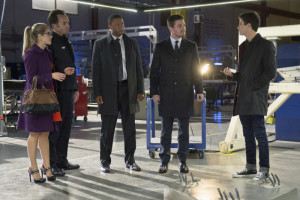 Summary: The much-awaited Barry Allen episode throws out an overwhelming amount of set-up and gear-turning, but yields an extremely entertaining and important episode.

Read an in-depth recap with trivia on our handy episode guide!

It’s tough deciding what to make of “The Scientist”. This episode feels decidedly different from the rest of the show, though there’s no question of why that is. This is the episode that introduces The Flash, for one, so there’s a fine line to tread already. And among other things, this one of the most important episodes of the series: as of “The Scientist” we officially have superpowers. For real. Legitimate, actual superpowers.

In that respect, it’s funny to think of what Arrow was this time last year. If we were to tell our past selves from around the Huntress arc that exactly one year later the show would feature in-costume Black Canary, Ra’s al Ghul, Barry Allen and legitimate super solidiers—all before the midseason finale—we’d laugh, or think the show went downhill Heroes-style. But it’s been such a slow burn with the fantastical theatrics, with little hints and bits of pulp here and there (things like the earthquake device in “Sacrifice” or the giant V-shaped hole in “State v. Queen”) that the snowballing effect allows a big episode like this to be kind of, well, underwhelming. That’s to its benefit, really, because the fact that Oliver is battling super soldiers (which he’s known existed for years!) doesn’t ring false or too big.

That’s helped by the other big, different-feeling thing that goes on in this episode: it’s overshadowed by the anvil-dropping at the introduction of Barry Allen. And again, it’s hard to decide what to make of all this. On one hand, this episode screams backdoor pilot, with the way Barry so quickly hijacks the screentime and even gets his own musical motif. But then, that is exactly what it is, and there’s no big secret about it. So while in the narrative scheme of things Barry’s introduction is kind of awkward in how important he immediately is, the show can’t really be blamed for milking the potential. Barry will be the first fully-powered superhero that we know of in this universe, so it’s going to be a big deal. 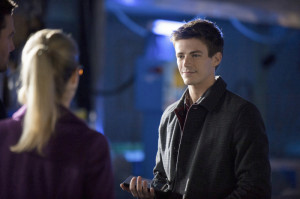 That Barry’s obvious importance isn’t annoying is mainly thanks to Grant Gustin’s performance. Simply put, the guy is immediately likeable. Akin to Emily Bett Rickards’ charming awkwardness, Gustin tempers the ticks and ineptitudes enough to keep Barry grounded and not the caricature he could easily be played as. The way the cast interacts with Barry as a character also keeps things tethered; while Felicity is immediately smitten, most others aren’t particularly fond of him. There’s enough snarky youth jokes thrown about that Barry isn’t presented as a Mary Sue character he could be. He might end the episode being “the only one who can save Oliver’s life,” but it has more to do with Felicity’s infatuation and convenience that he happens to be there rather than Barry being the best of the best. That balance relates to how the episode touches on Barry’s backstory while not necessarily being connected to it. He arrives to Starling based on a lead related to his mother’s death, but it’s pretty much definite that the serum won’t be related to what gave the murderous speedster in his origin powers. The idea that he’s chasing a lead is a convenient way to bring him into the episode, but that the lead is false helps keep this still being squarely Oliver’s story at the core. That’s important when it comes to this situation, bringing Barry into the story while keeping him from stealing the story. That might still happen next week, but at this point the introduction of proto-spinoff-Flash is quite balanced among all the wheels already spinning for the episode.

Oliver himself makes quite a few bad decisions throughout the hour, all tied to the apparent horror that the Miracle drug inflicted on him in the past. The flashback ties in well this week, with the apparent (but totally not final) death of Slade, a rather horrifying scene in itself. Manu Bennett hasn’t been given too much to do this season, but he’s definitely played his snark-through-the-pain stint about as well as anyone could. Since we’ve only seen glimpses of the serum’s potential, the notion is actually more frightening than it ought to be, considering it’s such a simple concept for a superhero show to tackle. There’s a distinct possibility that Slade will be the superpowered being Oliver mentioned facing before—which is exciting—and that something far worse is tied into his island escapades. It’s certainly driven Oliver to accidentally be a jerk to Barry, Felicity and especially Roy, though the episode smartly keeps his reasoning logical, even if not wholly correct. 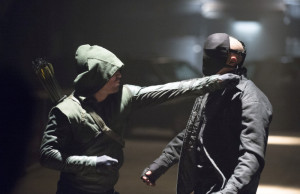 The other subplots fare just as well in their limited screentime. Susanna Thompson continues to play the same stoicism Moira exhibited while incarcerated, and it’s made her a character to root for thus far. There’s some awkward humor in asking the audience to feel bad for Moira because her friends don’t show up to her lavish elegant rich person party, but the idea is solid. It works best because, like Moira’s return to Queen Industries, the reactions from characters are decidedly not melodramatic and soapy. Oliver feels bad for how his mother is treated, but Moira and Thea are quick to keep it from turning into a huge ordeal. It’s a stark contrast from the very melodramatic and soapy interactions between Moira and Malcolm, which are filled with bombastic threats, flowery speech and subterfuge. The soap works in that sense perfectly, because the situation is more bombastic and big, and it’s evidence of how the show has managed to pull off its superhero drama/soap opera duality without alienating either side. It simply knows when to play things big or play things real. It remains to be seen where the Malcolm material is heading, but considering how big a role the League of Assassins is playing, it shouldn’t be long before we see John Barrowman back.

Roy’s subplot moves along the swiftest, with only a few brief and mostly eventless scenes that pretty much serve to get him where he needs to be for his big cliffhanger. His storyline is probably the least aptly handled; each part of the mystery jumps so quickly that it all seems tailored only to force him into the Miracle plot without really getting him involved in it. That, in turn, gives Oliver a reason to put an arrow in him—again, a shocking twist that almost feels like a little too much too quickly. There’s precedent for it, if nothing else than because this is Thea’s boyfriend. But “The Scientist” seems intent on pushing Oliver’s utter fear of the Miracle drug, to the point that he’s getting a bit out of control. That makes sense, but he has to expect that this course of action will come back to bite him soon.

It’s typical for Arrow to be firing multiple stories at full speed, but this episode packs in even more than usual with its subplots. It’s to its detriment at a certain point, as things pop in and out in a flash (hehe). There’s just as much set-up for next week as there is any sort of conclusion, which makes it hard to judge “The Scientist” on its own merits. But while its end result is fairly predictable, the massive developments and solidification of superpowers play out as one of the more enjoyable hours of the season. How it ultimately rates in the grand scheme of the season will depend on how well its successor capitalizes on these developments, but it’s successful at being exciting nonetheless.