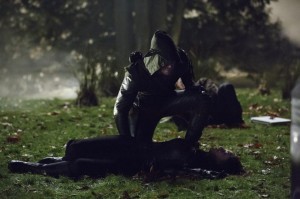 After Helena Bertinelli discovers Oliver is the vigilante and becoming romantically involved, Oliver takes it upon himself to train Helena in her quest for revenge. However, while trying to turn her focus and methods toward justice, he finds that her dark nature might never allow for that. Meanwhile, after Felicity rekindles Walter’s suspicions about Moira, he finds his wife’s copy of the mysterious list that Oliver is working from in his quest. Walter asks Felicity to dig into what the names mean.

“My name is…” Helena Bertinelli.

The birth and education of the Huntress continues in an episode much more compelling and entertaining than its preceding hour. And while normally it would be rather asinine to have a hero training another hero so early into their young career (and into a young series), the microcosm of Oliver’s situation that Helena represents offers a nice checkpoint for his efforts.

Up to this point, Oliver has been singularly focused in such a cold, methodical fashion that he hardly seems like the first option as an invitee to speak at a Vigilante Scared Straight meeting on the virtues of true justice. Not only is he quick to use physical force but he’s already found himself crossing the line to both blind rage and deadly force. Not to mention, he’s had to have Diggle (David Ramsey) convince him to help others outside of the precepts of his father’s list. Things that make it baffling that Oliver would feel qualified to offer any kind of mentorship to Helena. Yet, the episode doesn’t let him off the hook for his hubris.

If anything, Oliver actually fails in his efforts to steer Helena down a more virtuous path with her anger, hatred, and drive for revenge. It’s an honest result that lends the series much more credibility than if Oliver had managed to convince her in the name of righteousness, in that way television shows are wont to do. Sure, he helped put away her father for a very long time, taking away the focus of her crusade, but he trained and unleashed her unchecked and unbridled on the world to stumble her way through it. What’s more is that, in the end, he did it for selfish reasons and that burned him. All in all, not the most successful venture for young Mr. Queen.

What was successful — or rather, more successful than last episode — was the interaction between Stephen Amell and Jessica De Gouw. It’s safe to say that while people liked the character of Helena in last week’s outing they weren’t overly thrilled with De Gouw’s performance. Whether it’s stronger dialogue or scenes that effectively pull Oliver and Helena together as well as pit them against one another, De Gouw is much more convincing this time out and the hour more engaging for the audience. The two have superb scenework together that provides Amell some of the best acting he’s done on the series to date. Still, there are times where De Gouw’s delivery isn’t quite up to snuff and one has to wonder if it’s some flaw in her ability or the fact that she has to work to cover up her native Australian accent. You never get a hint of her accent but words sometimes don’t seem to sit comfortably in her mouth. Then again, anyone saddled with the noxious line “You have failed this city” would have a hard time selling it.

In particular, though, De Gouw seems to have a tougher time with Helena’s emotional outburst at dinner. This could have to do with the fact that the scene as presented came across as rather adolescent. A story like this that deals with the human aspects of a character waging a war against crime is going to feature relationship drama of some fashion. Here, though, it felt tacked on and out of place, even if it gave Helena a reason to feel hurt and push a wedge between her and Oliver. They are young adults still finding themselves and properly learning how to relate to one another, which can be played in an honest, adult fashion. This felt more like a lunchroom scene in a high school commons and served to undercut Helena’s pain as something childish rather than pathological. Tommy and Laurel’s confrontation isn’t spared either and the moment of angst between the two doesn’t feel earned as a result. The unfortunate part to all of this is that Helena’s issues, Tommy’s pride, the strife between Tommy and Laurel as he’s trying to change his spots, the awkwardness between Ollie and Laurel and between Ollie and Tommy all are valid concerns that were given short shrift.

Something given more heft this episode is a “B” plot featuring Colin Salmon’s Walter. Freshly back from a jaunt around the world to clear his head, Mr. Steele faces that reality has not forgotten about Moira’s clandestine salvage and storage of her late first husband’s wrecked yacht, and neither has the intrepid Felicity Smoak. The overwhelming advantage to a secondary storyline like this in a series like this is that it provides a quest to invest in independent of the main arc. While relationship drama has thus far been used to provide changes in pace from events all related to Oliver’s campaign, this is the first subplot that lets the audience play along. What that provides is an expansion of the world of the show and a broadening of the focus of episodes. It also allows us insight into other characters on their own merit rather than through their relationships to Oliver. When all is said and done, Walter and Felicity’s thread ultimately ties back into this crusade Oliver is on, by way of Moira (Susanna Thompson) and Malcolm Merlyn’s (John Barrowman) group. That doesn’t detract, however, from the welcome diversion made all the more fun by Emily Rickards’ quirky Miss Smoak.

This was definitely the stronger of the two episodes in this Huntress mini-arc. Again, while it would seem weird to already be introducing other heroes and having Oliver be the one to guide them, this chapter turned that on its ear to provide Oliver insight into his own character. That’s precisely what a guest character’s arc should do for a series lead. What’s more is that it also upped the stakes of the world Oliver is operating in. Bertinelli’s takedown will have consequences, but more importantly, Helena’s actions have stirred a pot already frothing from “the Hood”‘s dalliances. This will have far-reaching impact not only heading into the midseason finale but throughout the back half of this season as well.

Like the previous episode, “Vendetta” isn’t a bad episode. It’s quite a bit of fun, actually, and with all the costumed antics, it’s the first time it actually seems like we’re watching a superhero show. Things move along quickly, and the action sequences are well-placed even amongst all the relationship drama.

Unfortunately, much of what I’d said about De Gouw and the Huntress character last week applies this week, and it’s what seriously holds the episode back. Huntress isn’t a complete failure of a character, but she’s the weakest major character thus far and an unfortunate outing for the show’s first substantial guest hero. The show deserves credit for the same route most other shows do when introducing a new character, though. We don’t see the typical “superheroes fight then team-up and become friends” formula, or at least not in the same way or with the same outcome. Oliver and Helena have some ups and downs, Oliver essentially creates her entire identity, and it ends on something of a downer note.

It’s a fresh way to tell a superhero team-up story, but it still doesn’t make up for the sub-par performance and the lack of subtlety the Huntress brings. Helena’s turn back to vengeance due to an awkward dinner date also feels very forced, like a failed attempt to shoehorn in the Tommy/Laurel relationship stuff into the main story for whatever reason. It’s also telling that, while the episode ends on what should be a feeling of excitement and yearning to see more Huntress…it doesn’t. The only excitement is the question of whether or not De Gouw’s performance will improve or we’ll see something more interesting for Huntress.

Luckily, Stephen Amell really stepped up his game this week, showcasing a much wider range than usual. When Diggle states towards the end of the episode that Oliver seems more open than he’s been before, it’s truly what we’ve been watching throughout the episode. Like the end scene with his mother in “Legacies,” seeing Oliver so engaged with another person actually ups the episode’s quality quite a bit, and shows just how much fun the show could become once Oliver gets out of his dark gritty phase.

It’s also good to see more from Walter and Felicity Smoak as they unravel the mystery of Moira. Walter finding another list is sure to spice things up and dovetail into the main storyline very soon, though I worry if that’s going to put Walter right in someone’s crosshairs. Meanwhile, though Tommy and Laurel had really sweet chemistry last week, it was a bit obnoxious here. In fact, that entire dinner scene escalated way too quickly, despite potential for addressing serious issues with these characters’ relationships. All we got was a hastily thrown together argument, and considering Tommy and Laurel reconciled one commercial break later, it didn’t serve a purpose beyond setting up the final battle.

That said, this might have been the most fun Arrow has ever been. Even with the downer ending, there’s a certain optimism that Diggle and Oliver carry about the events. It’s good to not see everything being so dreary, and to have the characters realize that things are changing for the better. Likewise, while Huntress may be a disappointing low point thus far, the show as a whole is still getting progressively better as it finds itself.