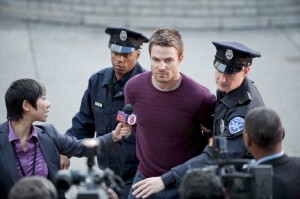 Summary: Deathstroke, John Barrowman, and Oliver taking a page out of the manipulative mastermind handbook results in a meaty, fast-paced episode despite a lack of action.

Detective Lance works to pin Arrow’s crimes on Oliver, while Oliver gets Laurel to be his defense attorney. However, it turns out to all be part of Oliver’s plan; he knew people would get suspicious of his identity eventually. He got himself arrested so he could have an alibi while Diggle poses as Arrow to clear Oliver of suspicion. In the island flashbacks, Oliver is captured by Edward Fyers and tortured by Deathstroke, who question him about Yao Fei, the hooded man who has been helping him. Meanwhile, Walter investigates the Queen’s Gambit ship and confronts Moira about it, only to hit a dead end, prompting him to leave to get away from the secrecy.

Read an in-depth recap on our handy episode guide!

The twist on the typical “superhero unmasked” story—that Oliver intentionally did it so early—alleviated many of my fears of the show moving too quickly. It’s a clever way to play the story in a new fashion, even though the actual story beats aren’t all that unique themselves. It also serves to portray Oliver as even more cunning and intelligent than he seemed to be up until now.

What really makes this work, though, is that this level of cunning isn’t portrayed as completely positive. Oliver is deviously manipulative throughout this hour, and though his intentions are ultimately for the greater good, the show doesn’t shy away from bringing up how profoundly he’s screwing with everyone in his life. While this idea has been around since the first episode, until now it’s been more as the result of his dual identity. Here, though, he’s deliberately manipulating people on both a mass and very personal scale. Luckily, we’ve had five episodes of flashbacks to show us why Oliver is damaged, and even more scenes showing that he does care, so he’s not completely unlikable here. It also helps that Amell has been softening up his performance a bit, no doubt thanks to playing more off of other actors than simply festering in anger all by himself. The show seems to be intentionally making us feel conflicted about Oliver’s actions, a spin on the superhero genre we’ve never really gotten before. There’s still a possibility that, optimistically, Oliver will learn to better balance his heroics with how he treats his family and friends.

This was Paul Blackthorne’s first big episode, and he played up Detective Lance’s jaded, angry attitude exceptionally well. His lack of snarky quips were missed, but it’s a worthwhile trade-off for the great development for him. He’s very sympathetic here; yeah, his vendetta against the Queens is a serious problem, but he’s totally right about his suspicions, and Oliver’s practically sacrificed Lance’s credibility for the sake of this mission. It’s one of the elements that makes us conflicted about rooting for Oliver when he pulls these stunts, despite how much he’s fighting for the greater good.

I was impressed with Katie Cassidy this week, in particular. While Cassidy has certainly been okay as Laurel thus far, she hasn’t really shined as anything beyond a generic female lead aside from some brief moments. However, this time around, Laurel lost some of the forced edginess during her tumultuous emotional experience, giving Cassidy a chance to play Laurel more raw. Cassidy’s proven that she can mix edgy and emotional on Supernatural, but it’s becoming clear now that Laurel just hasn’t been written all that effectively up until now.

Willa Holland is much stronger as Thea when she isn’t playing her as selfish or drunkenly partying. Holland and Amell have a very sweet brother/sister chemistry that’s worked this week and last much better than it had in the earlier days of the show. Making the connection with the arrowhead shows some brightness on her end, which could lead to her being a major player down the line if her suspicions continue.

Diggle was probably the only person that got something good out of all this, in a way—he got to have fun. His sidekick/partner status has been underplayed (probably for the best) but it’s a bright spot anytime we see him getting excited to help. David Ramsey’s excitement in Oliver’s base looking at the tech, for example, is well-played, and a rare light moment for the show as a whole. But even then, he was still put in harm’s way for the sake of Oliver’s mission. He went for it, and Oliver made it clear he didn’t want to put him in danger, but it still happened anyway, a pattern which could lead to tragedy down the line. Hopefully it takes a little while before that happens, though, because their first outing working together was great.

The subplot with Moira and Walter was a pleasant surprise. While Moira has been occasionally teased as a straight-up villain up until now, it’s nice to see that she isn’t some devious mastermind (necessarily) and does genuinely care for her family. But on the other hand, whatever she’s tied up in can’t be taken lightly. Colin Salmon and Susanna Thompson had better chemistry this week than they’ve had since the beginning of the show, and seeing this story dramatically unfold without being too melodramatic is good to see.

Also within this storyline, John Barrowman is a bit of an enigma as the Well-Dressed Man, which is probably the point. There’s not much that can be said about his performance just yet, but Barrowman has enough charisma just as himself that even when his character isn’t doing much, he’s still engaging. It’s good that there’s no cloak-and-dagger routine, just a general air of mystery to keep us interested for whenever the underlying plot starts to unfold in bigger ways. While Oliver’s storyline is happening at a very fast pace, the bigger season 1 mystery is a bit of a slow burn thus far, which is probably a good thing. 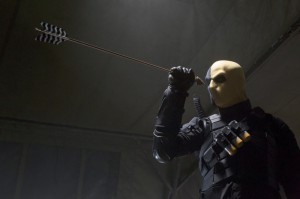 Deathstroke is the guy everyone’s been talking about, and like Barrowman’s character, at this point he’s still an enigma. On one hand, his costume design is very cool (and is a rare case of actually looking even better in promotional photos, too.) On the other hand—and this might be an unpopular opinion—it’s hard to feel like his split orange/black face mask really fits into the world the show’s built up thus far. Deadshot’s eyepiece in “Lone Gunmen” served a technical purpose, so it worked; Deathstroke certainly looks like his comic book counterpart, and his design itself is certainly not goofy, but played against the otherwise less colorful world of Arrow, it kind of does look goofy. But on the other other hand, he looked darn cool catching/breaking the arrow, and the fight choreography (as usual) was fantastic. So it might be a case where he’ll look better in retrospect as the show goes along, and inevitably adds more colorful characters from the comics.

Despite the show’s capacity for exceptional fight choreography, it says something when one of the most engaging episodes thus far is also the least action-oriented. It’s been brought up before, but the show’s biggest strength, ultimately, is the potential for the supporting players. There still needs to be more injections of lightness and humor from time-to-time, but it’s feeling less like a “gritty retelling” of Green Arrow now, and more of a very intense character study of how a real-life Oliver Queen might be presented. Oliver might be a superhero, but that doesn’t mean all of his decisions will be clear, especially for someone as clearly damaged as Oliver is. And if the show continues in that direction, it’s going to reach a point where it truly is different than any other superhero show on television.

There is something about this episode that is hard to put a finger on but it doesn’t quite flow or soar like the two previous weeks. Plot-wise, there is great advancement and there are key moments of characterization that continue to build a strong foundation. Yet, there is something of a detached quality to everything that doesn’t engage in the way it should.

The twist in Oliver’s arrest — that he’d planned to be caught as a way to plausibly separate himself from his vigilante behavior in the public eye — is a commendable and intelligent one. It speaks not only to Oliver’s motivation but the excessive and obsessive planning the time on the island afforded him. The execution here, though, seems a bit clunky, as well as inadvertantly taking something from Detective Lance’s character. It comes off less planned and more imposed plot turn.

Amell returns to a stilted quality in his performance that puts up a wall between he and his two primary scene partners this episode, Katie Cassidy and David Ramsey. While Ramsey manages to sell Diggle’s participation and consternation with Oliver, as well as providing an outside voice for the story to get at the moral implications of Oliver’s actions, Amell and Cassidy have a much harder time connecting to really bring across the emotion and the turmoil of their relationship at present. That wall, though, provides great antagonistic material between Ollie and Blackthorne’s Lance. Amell also manages to flash far different signs of life during the flashback island scenes, though again those bits seem disconnected from the main story other than providing background for Oliver’s torture.

An interesting development in the narrative here is Moira Queen’s involvement in what happened to her husband and son. Looking less the devil than originally anticipated and more the victim of a deal with the devil, Moira comes across much more sympathetic. This also gives more life to the relationship between her and Walter, who is believably put off by her deception. It’s welcome to see both a deepening of the supporting characters and opportunities to build the chemistry and cohesion of the cast as a whole, something that is still lacking at this point in the series. Thompson and Salmon both do good work throughout. Now, if we can only have a clue or two into guest star John Barrowman’s character.

In the end, while there are enjoyable elements of this chapter, it’s hard to say as a whole that the episode was enjoyable. Still, you have to like an effective if woefully brief appearance by DC baddie Deathstroke, as well as the effort to create the “ghost story” of the hooded man that gave us Diggle in green.