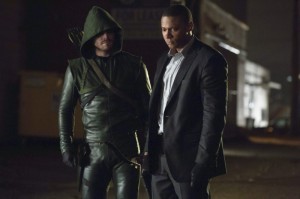 Summary: Diggle gets in on the action in an episode that spotlights the supporting characters above its lead for the first time. Despite some structure issues, it succeeds.

Read an in-depth recap on our handy episode guide!

“Whose episode is this?” is a thought that crossed my mind multiple times throughout “Trust But Verify.” The easy answer is that it’s Diggle’s, based simply on the fact that since his plot involves the costumed Arrow, it’s the A-plot. And if it’s all broken down, the plot surrounding his former officer (most likely) gets substantially more screentime to cover the exposition and action.

And yet, it didn’t always feel like that. In fact, the episode felt evenly split among Diggle’s struggle, Tommy’s parental conflict and Thea’s careen to rock bottom. This is a new development for the show as a whole, as it’s the first time in its short history that we’ve had an episode focus on pretty much everyone but Oliver. And on that end, the show handled this nicely; Oliver was still integral to the plot, but only when necessary and never in a way intrusive to the other characters. He still got the last cliffhanger, and had his own substantial development—understanding that his father is not perfect, and his confidence in his mission might not be flawless. This is good stuff for Oliver, who’s been slowly breaking down and reevaluating his thought process over the past three episodes. But it’s the supporting characters that really get the spotlight, and “Trust But Verify” is a testament to their oftentimes underutilized strengths.

Diggle’s story is the least surprising (was there any doubt that his officer wasn’t the villain?) but no less engaging. Like “Damaged” played with the “hero unmasked” story, the typical “hero pitted against hero” structure was already shaken up a bit when the big confrontation—expected in the final act—happened in the teaser. I quite like the idea that the episode plays the archetypal story backwards, in a way, starting off with tension and then spending the episode having the heroes try to relieve it. It feels more organic and less like forced good guy vs. good guy drama, and does more to showcase the bond Oliver and Diggle have forged as opposed to their differences. David Ramsey played up his chemistry with Oliver and range throughout the story, and was especially strong in the last bit once his niece got involved.

Tommy got some substantial material this week, in a wonderful showcase of how much he’s grown since his debut of the smarmy douche in the first episode. “Cutting off the rich guy” is something of a tired plot device, but we’ve seen a good bit of Tommy being exposed and vulnerable emotionally because of it, certainly the right way to go. This week’s strongest arc relied on this, and it paid off quite well thanks to Colin Donnell’s honest performance. Tommy isn’t the sharpest guy, nor does he always have others’ best interests at heart, but he doesn’t really sport any kind of facade at this point. As such, it’s hard to not be sympathetic for him, because we know his disappointment and frustration are very real things—which we realize are real thanks to John Barrowman’s surprisingly subdued performance. There’s been some worry in past weeks Malcolm might end up a charming-yet-two dimensional hokey villain, but we’re finally seeing glimpses of some depth. It’s hard to nail down exactly what Barrowman was trying to do with his performance, but it plays like he (the actor) knows something specific that we don’t yet. Considering up until now Malcolm has mostly been played up as “generic evil rich guy” but with Barrowman charm, adding something noticeably different about him is a good thing.

Thea’s plotline teased some potentially great things, but ended up being quite disappointing. It was certainly a well-done cheat, making it seem as if she’d overheard that Moira knows Walter’s whereabouts, but it didn’t serve the episode well. We’ve gotten teases about Thea possibly catching on to Oliver’s secret, so getting her into the conspiracy story could have huge story possibilities. But, of course, we instead get the annoyingly common “mistaken affair” trope. There is a twist here, in that it leads to the reveal that father Queen was unfaithful, but it’s disappointing that a story that could have provided Thea with some much-needed growth didn’t do much for her. Instead, it goes right back to Thea being critical of her family, partying, and getting in trouble. It’s bigger trouble this time, and while the Vertigo stuff is something we’ve been waiting for, it’s hard to really care about her stake in it anymore.

While these multiple plots were balanced tonally, it felt like they were shuffled around in a fairly haphazard order. Thea’s car crash was the worst offender; it’s a pivotal scene that could be worthy of an act break, but where it was, it felt shoehorned in as an afterthought. We spent way too much time between her last scene and her drugged-out driving—in between we solved the major plot, killed the main villain, etc.—so the build-up was long forgotten by that point. It’d be hard to fit the scene in many other places, but surely something more artful could have been done with its placement than just tacking it on as a last-minute act break. 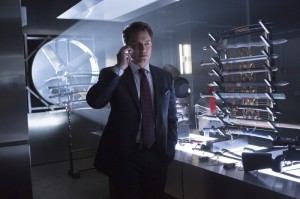 Tommy’s (very good) voiceover overlaying Malcolm in his secret lair is another scene that felt somewhat misplaced. The scene already stands out as being one of the most overt comic book-y scenes of the series thus far, what with the villain’s lair/alter ego drama contrast, and while it’s memorable—and just darn cool—it doesn’t work where it is. It kills the momentum of the rest of the story by interrupting it, but since it’s not the last scene of the episode, the dramatic weight doesn’t resonate since we have to jump right into the next scene. The show might need to re-evaluate how much emphasis it wants to place on cliffhangers and how much it should place on good final strokes for an episode. In this case, the island flashback cliffhanger sort of tied more into the A-plot, so it makes sense why that would have been the choice. But ending on the Tommy’s reaffirmation that his father is a bad guy while we learn the Big Bad himself might not be so unfeeling might have been a stronger final note to play, as it still connects thematically with Oliver’s daddy issues and Diggle’s trust issues.

Despite some of these issues structure-wise, the content of the episode was some of the most engaging non-action stuff the show has thrown out. The supporting cast is proving to be one of the strongest parts of the show, and for the first outing having Oliver on the backburner, much of the growth was successful. The relationship between Merlyns is becoming increasingly more intriguing, Diggle’s place in the mythology is solidified, and even the less-than-stellar Thea material has potential for the future. If it continues, Arrow might need to be careful down the road to make sure it doesn’t go the way of mid-series Smallville, where Clark could be superfluous to his own show. But for now, Oliver’s still squarely in the center of all this, even when he’s not, and it all works because of that.

As Diggle is a personal fave of the series, it’s a treat to get an episode that expands his backstory, his character, and his role in Oliver’s mission. Most important, it’s always welcome in any show to get a chapter that advances the depth of relationships between characters. With trust the main theme — even in the normally more prosaic island flashback scenes — this was a smorgasboard of the various relationships and gave needed depth to all of them.

In particular, it was good to see more of the Merlyn family dynamic. Colin Donnell did wonderful work throughout the episode shading Tommy and you can see more of the darker elements that have been hinted at in his character. This played extremely well with John Barrowman’s Malcolm and, though the relationship itself isn’t extraordinarily original, especially given the dead mother/wife as catalyst, there is a lot of promise to the way the two are playing it.

Speaking of being on the downside of original, Thea’s turn to the Vertigo drug was to be expected but it was good of the show to take some care in rooting her use in character rather than just arbitrarilly hooking her on it. Another good stroke was planting that story thread in this episode to set up next week’s confrontation with the Count. The writing isn’t always perfect but the plotting throughout this first season has been one of the most appealing aspects of the series.

We rightfully give a lot of praise here to Susanna Thompson for her compelling work in making mama Moira properly layered as a character that could easily be unsympathetic and cliche and she brings much life to Moira’s conflicts here. Not just her present troubles with the Tempest Group and Malcolm but her past, something that makes the possibly cringeworthy tête–à–tête with Thea fly. Willa Holland has sort of a thankless role at the moment as the angry teenager but she and Thompson made it work this episode.

This, though, was an episode for David Ramsey to shine and to build even more connection between Diggle and Oliver. To see further into the mechanics of what makes this man tick, in the role that they’ve established in Ollie’s campaign, enriches the series overall. That final scene with Diggle and the list book was actually quite poignant. Also, the small work they did in further establishing Diggle’s relationship with his brother’s widow felt real, honest, and foundation strengthening.

Alternatively, the Black Hawk plotline was fairly standard and one can’t help but wish they could’ve done more with guest star Ben Browder, usually a fun and energetic genre presence. They didn’t waste him, per se, but it felt like they didn’t allow him to invest Ted Gaynor with much life to make him memorable. It was nice that the conflict between Diggle and Oliver was rooted in something a bit smaller and low-key than the trope usually summons, which gave it a more intimate feel and stronger personal stakes. In particular, the bug-planting plot point and its little reversals was well-played.

There was an assured quality to the production of this episode that really spoke to how in a groove they are now. Though the basic ‘A’ plot was ho-hum, the writing felt streamlined and the fat trimmed. The editing, specifically, was clean and quick without losing pace, coherency, or personality. Even the often tangential island scenes had a spark and a solid throughline, as well as actually relating to the present time of the episode. Overall, another solid effort.