Video Interview: Willa Holland Tells Us What’s Up With Thea In Arrow Season 2 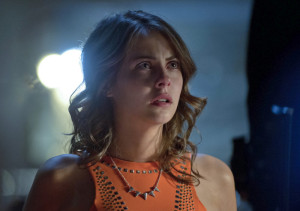 It’s never nice to play favorites, but if one were to pick a MVP of tonight’s Arrow season premiere, it might be Willa Holland, who, as Oliver’s sister Thea Queen, has some fantastic moments in the first new episode back.

We interviewed Willa on the Vancouver set of Arrow, and she tells us about how Thea starts off better than most at the start of the season, both in running the club and in her relationship with Roy, who is doing some extracurricular activities that cause some drama between the two of them.

Willa also talks about her character’s relationship with her mother Moira, and why Thea won’t accidentally wander downstairs to discover her brother’s secret lair…

Check it out, and don’t miss the season premiere TONIGHT (October 9) on The CW!