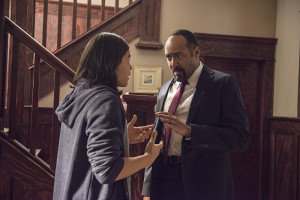 While we transcribe our interview with Paul Blackthorne to promote Wednesday night’s new episode of Arrow, we have a spoiler that came up in the discussion: The Flash characters of Cisco Ramon (Carlos Valdes) and Joe West (Jesse L. Martin) will be making their way to Starling City sometime soon for help on a case, in which they’ll be interacting with Blackthorne’s Quentin Lance.

We’re not sure yet exactly when that will happen, but still, cool news, right?

The Flash airs Tuesdays at 8PM on The CW; Arrow is on Wednesdays at 8.