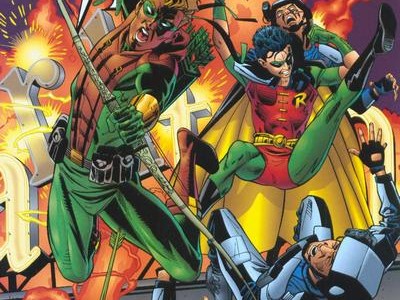 Since there had sometimes been confusion about the covers without any context, this year we’re going to describe the comic book covers that we are showing. The issue numbers on the comics will correspond to the number of days left before Season 5 begins. For example, there are 105 days left until Arrow Season 5, considering The CW just announced an October 5 premiere date.

Oliver Queen’s replacement Connor Hawke teams up with comics’ best Robin* Tim Drake in issue #105 of the Green Arrow series dated February 1996. This was the fourth issue to feature Connor Hawke in the lead role in the series. As for Tim? He was comics’ Robin for about twenty years until he adopted the name “Red Robin” a few years before Flashpoint. His series Robin, also written by Chuck Dixon, ran for nearly 180 issues, longer than any Robin title before or since.

* Dick Grayson was the best Nightwing.

105 days are left to the Arrow season premiere – be sure to come back daily for more countdown posts! Past “Cover Countdown” posts can be found here.