Interview: Willa Holland Talks About What’s Coming Next For Thea On Arrow 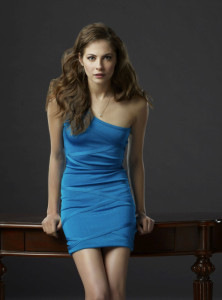 Continuing our string of Arrow interviews leading to the new episode airing this Wednesday, April 24, we’d like to share highlights from when we talked to Willa Holland at a roundtable at this year’s Wondercon convention in Anaheim, California earlier this month. Some video of the interview should be coming, but for now… what do we have to look forward to from Thea? Is she going to put a bow and arrow in her hand and do something Speedy sooner rather than later?

“I’m waiting for the day that the arrow is put into my hand, guys,” she assures the table. “I’m adamant and ready to do so. I think we’re getting closer every day, but I think that the show is doing something, and I actually very much agree with what they’re doing… I think they’re going to instill the characters a little bit more before taking them on these different paths. There obviously have been hints to me being Speedy and Laurel becoming Black Canary, and then obviously, already, off the bat, Oliver is Arrow.”

“Oliver went through five years of a very traumatic event, so there were a lot of things that brought him into becoming Arrow, so I feel like it would almost be like throwing that away if we didn’t do justice to anybody else becoming those characters,” she continues. “It wouldn’t do justice to him. I think that it’s very true, and it’s also giving us the option to really dig in and go through more emotional and dramatic stuff with our characters, and find our characters before they find themselves. It’s quite interesting. That’s half the joy; the excitement and the anticipation of ‘when the heck are they going to write that in?’ You know what I mean? There is all that stuff on the back burner, but it’s almost better waiting for it; the anticipation.” 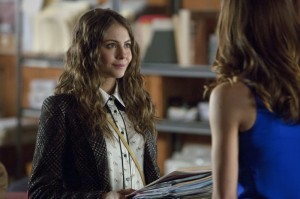 Willa says that between her new job and interaction with Laurel at CNRI and her new relationship with Roy Harper (Colton Haynes), things are starting to look good for Oliver Queen’s little sister. “I think she’s almost somewhat… on a virtuous path, finally,” she says. A lot of what we’ll see of Thea in the season’s final episodes will happen in present day, though she promises “a little snippet” in the flashbacks in Episode 21, “The Undertaking.” While she refuses to spoil it, there may be an unintentional reference to something her character Kaitlyn did on The O.C.. “There’s been like a thousand script revisions since then, so I don’t know which take they’re going to use,” she says, providing that out if we don’t find it in the finished product.

“I don’t think that the flashback is very adamantly about Thea or Oliver, actually. I think it really doesn’t have much to do with them. I think it has more to do with Robert, Walter, and Moira’s relationship as a whole. They do show Oliver and Laurel together a few times, but the flashbacks really do surround Moira and what she’s up to, and how it all kind of began,” she teases.

One thing is certain — we will be getting some good Thea material between now and the May 15 season finale, and a lot of that will involve her interaction with Roy. “You would think Thea would start following Roy down his kind of dangerous path, but in all actuality, since she’s going through a good stage in her life, it’s almsot like she’s trying to put him underneath her newly found steady wings. There’s that interesting thing that happens at the end of ‘Salvation,’ where he’s holding the red arrow, and they kind of now are going on this journey, almost, to find out who the Arrow is,” she teases. 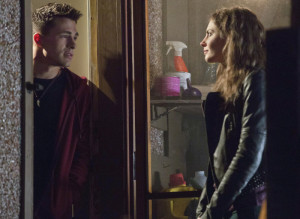 “Roy gets kind of enamored… obviously, the Arrow saved his life, so who wouldn’t be enamored with someone who saved his life?” Willa hints. “So he’s now on a path to find out who he is, and Thea, being completely in love with the guy, follows him, and is very reluctant to do so at first, because she knows how absolutely dangerous the guy is, and also, there’s the Black Archer that’s out there, too. There’s a whole dynamic that’s going around. It’s scary. I think she’s kind of afraid of the fact that she might be unwillingly searching after her own brother,” she says, before assuring us that Thea doesn’t actually know just yet. “I don’t think she has any idea about that, but I think just the idea, the fact that she’s searching after the Arrow, is kind of just a little scary,” she says.

A new episode of Arrow airs this Wednesday, April 24 on The CW! Stay tuned for some video, and a new interview to come tomorrow! Images from this week’s show can be found here.