The terrific “Curtis Holt” himself, Echo Kellum, becomes a series regular and a full-fledged member of the team in tonight’s season premiere of Arrow. Season 5 will see his character officially adopting his comic book alter ego “Mr. Terrific;” he is but one of several new vigilantes that will be protecting Star City this year. 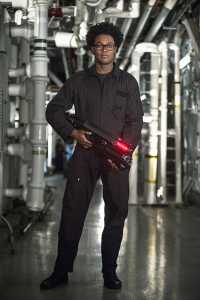 Be warned, some spoilers may be discussed; and, of course, don’t miss the season premiere tonight at 8PM on The CW! More “Legacy” season premiere coverage can be found here.

GREENARROWTV’s CRAIG BYRNE: How did it feel to get the news that you’d be a series regular this year?

ECHO KELLUM: I was ecstatic! I was just so thankful that they saw something they really liked in my representation of Curtis, and that there was something they liked so much they wanted to do more of it. Which makes me feel good as an actor, as an artist, and as a fan of comic books that I still get to still delve into the character and take him further; even get him to a point where you get to see him in his alter ego… it’s just really something I hadn’t envisioned in my wildest dreams, but I’m so freaking happy and thankful I get to do it.

Was this the first time you got to do Comic-Con as a guest?

Yes, it was! It was so surreal. It was so amazing to be there. I’d been twice before, just as a fan, but it was just great to experience that, to have the adulation of fans, and just to get other amazing actors that I’m a huge fan of, whether it’s the cast of Game of Thrones or The Walking Dead… like I said, it’s just such a surreal, amazing feeling and moment, and I just can’t believe I got to do that. 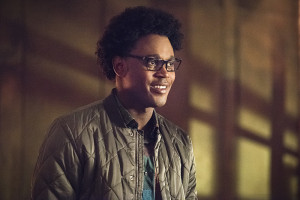 We know a lot about how other characters are as we go into the new season, but how is Curtis feeling?

Going into the new season, I think Curtis is in a state of flux. He’s figuring out what he really wants to do with his life. He had a lot of life-changing experiences last season, whether it was helping thwart nuclear annihilation or dealing with robotic bees that tried to kill him… it was a world he didn’t get to be a part of, seeing what the Green Arrow was last couple of years, it was definitely interesting, but more so something you watch from home, so being a part of it, it’s gonna change anybody, if you start seeing what the inner workings of the city are and how bleak it can be sometimes. I think it’s something where you see Curtis coming in and wondering what he wants to do with his life, and I think he makes a decision pretty quick that he wants to be more involved in helping clean up the streets of Star City.

Does he agree with Felicity there needs to be a new Team Arrow?

Yeah, I think he does! I think he agrees with that, just because Diggle and Thea are gone, and the Canary’s gone, that the streets aren’t just gonna clean up themselves just because the team has disbanded and is down a man, so he feels that “we’ve gotta get back out there and continue the good work that you’ve been doing for all these years.” I think that him and Felicity, more times than not, definitely agree with each other and are in synch with each other.

There’s a whole lot more to this interview! Navigate below for Page 2: