On Saturday in Ballroom 20, the second largest room at San Diego Comic-Con, the annual Arrow panel, revealed some highlights to look forward to in Season 6.

Spoilers ahead if you don’t want to know anything about the new season.

• As TV Line reports, Team Arrow will not be facing a single big bad this season but a villain group. This “villainous cabal” will include the character played by the just-announced Michael Emerson of LOST and Person of Interest fame; fan-favorite David Nykl’s Anatoly Knyazev and his Bratva crew; and a new character well known from the comics, Richard Dragon.

Exec producer Marc Guggenheim mentioned they have a bigger announcement on Dragon coming at some point in the near future.

• The flashbacks that have been such an intricate part of the series have not been killed off. They won’t feature as often, and it sounds like they will be character-specific, similar to Floyd Lawton’s flashbacks in Episode 3.17: “Suicidal Tendencies” or Laurel’s flashbacks to between Season 1 and 2 in Episode 4.19: “Canary Cry”. 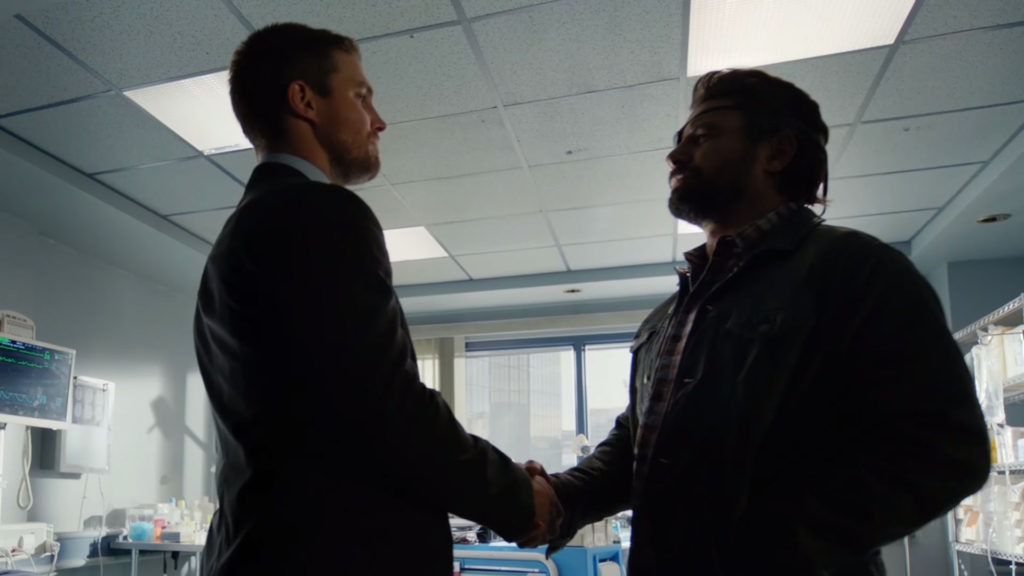 • It’s been hinted that Manu Bennett will be back as a series regular for Season 6, but that wasn’t confirmed. He is set to appear in the season premiere, as Oliver finds him alive on the island, evidenced in the Season 6 trailer. He’s also said to feature in a two-episode arc later in the first run of the season that will explore his character and story. Expect to see Slade flashbacks in that arc, likely from before his time on Lian Yu the first time.

• The panel confirmed that Katie Cassidy is back as a series regular, playing the Earth-2 version of Laurel, also known as Black Siren. “I’m so excited to be back. It feels like I never left. It’s interesting, the dynamic between Black Siren and the other characters. It’s exactly opposite to Laurel or Black Canary,” Cassidy said. The inherent rivalry between Laurel and Juliana Harkavy’s Dinah Drake, who is suiting up as the new Black Canary this season, will be an interesting one to watch. We got a preview in last year’s season finale, and the Season 6 trailer shows us to expect more.

• Oliver will be playing dad to his son William, suggesting that mama Samantha likely didn’t make it off of Lian Yu. From TV Line:

“Oliver is “not the best dad,” Stephen Amell admitted. “My first day on Season 6, it was all with Jack [Moore], who plays William.” Although the two had shared scenes before, “we had never really acted together, and I was really legitimately nervous. He exceeded my expectations, and I’m loving my scenes with him. But yeah, he’s a s–t dad.”

• Kacey Rohl’s hacker Alena, and likely her organization Helix, will be back, as will Vigilante. Guggenheim hinted that we’ll likely get the revealed of the masked do-badder’s identity this season, and that’s it’s someone we’re “familiar” with.

We’ll update with more from the panel as we sort through everything coming out of Comic-Con.