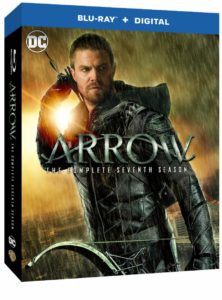 Disclaimer: Warner Bros. Home Entertainment provided GreenArrowTV with a free copy of this set for review in this post. The opinions shared are my own.

Arrow: The Complete Seventh Season recently was released to Blu-ray and DVD, available in stores and at online outlets like Amazon.com. The 4-disc Blu-ray contains all 22 episodes of Arrow Season 7 as well as two bonus chapters of Elseworlds so the entire DC TV crossover from last season is included. There are also deleted scenes and some featurettes. Let’s get into this review, shall we?

The Episodes: Arrow Season 7 was the first to have long-time Arrow writer/producer Beth Schwartz as showrunner, and as such, there was a slightly different feel to the show than seasons before. Schwartz and her writing team of Arrow veterans and newcomers did a fantastic job, especially when it came to fleshing out [most of] the supporting cast characters for Season 7, starting with giving Dinah (Juliana Harkavy) and Rene (Rick Gonzalez) more purpose and direction after the irritating OTA vs. NTA “war” in Season 6.

The season also spends its first third with Oliver Queen in prison. No one-week-only event here. This was great because it showed what the other characters mean to Oliver (Stephen Amell) as well as what he means to them. The Green Arrow is also a factor in these early episodes as there’s someone new running around town with a bow and arrow.

Arrow Season 7 also flips an old show trope into another direction as the show has flash forwards rather than the flashbacks of old. A lot of familiar faces are in the future, including a returning Roy (Colton Haynes), but also, we meet adult versions of William (Ben Lewis) and Zoe (Andrea Sixtos) as well as one of the season’s biggest highlights, Katherine McNamara as Mia Smoak, daughter of Oliver and Felicity. I enjoyed McNamara’s work on Shadowhunters but Mia seems to be a perfect role for her. And while the show’s makeup team did a pretty good job aging, say, Roy, a shorter haircut really didn’t do the trick in making Emily Bett Rickards’ Felicity into a 50-year-old, which was a bit distracting. Finally, after a great guest starring turn in DC’s Legends of Tomorrow Season 1, Joseph David-Jones is back as Connor Hawke!

Going back to the present day, Oliver’s time in prison leads to “The Slabside Redemption” which featured one of the best action sequences in the series’ history; I can also reveal that John Diggle (David Ramsey) has indeed been added to the “Olicity reunion” at the episode’s end. The whole “Ninth Circle” villain plot is a take-it-or-leave-it plot for me. The reveal of who “the new Green Arrow” was, was fantastic and well done, as was the casting of the person who played her (Sea Shimooka). But… unlike, say, Slade or Prometheus, what exactly the Ninth Circle was, never really resonated with or scared me, if that makes any sense. On a more interesting note, there were some good moments for Laurel (Katie Cassidy Rodgers), offering some redemption for the Black Siren, and I’m curious to see where her story goes next.

Arrow Season 7 contains the 150th episode “Emerald Archer” which is done documentary style and features some appearances by some old faces in Arrow lore.

Finally, we as fans learned near season’s end that Emily Bett Rickards and her character Felicity would be leaving Arrow after Season 7, and the season finale “You Have Saved This City” is her last. I rewatched this episode on the set — the high definition of Blu-ray looks great, by the way — and I think I enjoyed it more now that we know a little bit about Season 8, but at the time, I had the [perhaps unpopular] opinion that for a show that is supposed to be “the grounded one,” Felicity’s story had such a sci-fi end. Having her go into hiding with Mia makes sense. Having her missing while Oliver tries to find her is grounded. But Oliver going away to stop a multidimensional Crisis kind of threw the grounded nature of this series out the door. And yes, I get it that this is the same show where Oliver and Barry switched bodies in the crossover. Eh. I’m not sure. We will see. Stephen and Emily acted the heck out of it, though, both turning in great performances.

Even though they’d count as “extras” I’ll also mention the crossover. The Flash and Arrow chapters are wonderful, with Stephen and Grant Gustin changing roles as well as having the introduction of Batwoman. I’m not going to lie, though, the first thing I went to was the playing of the Smallville theme “Save Me” in Part 1. Part 3 of the crossover loses a little steam compared to the first two, but it’s a matter of going from two “10” episodes to an 8 or a 9; it’s not bad in the least. It’s just that Parts 1 and 2 are so darned good and enjoyable. And props to the Arrow writers for making the crossover directly affect what was going on with certain character relationships at that time of the season.

The Extras: The best extra on this set is the “Inside the Crossover: Elseworlds” featurette which includes a sit-down interview Arrow’s Marc Guggenheim and Beth Schwartz, Batwoman’s Caroline Dries, Supergirl’s Jessica Queller and Robert Rovner, and The Flash’s Todd Helbing. They are being interviewed by Hector Navarro who does a solid job even if his presence and the location of the interview reminds one of all the wasted time watching the painfully bland launch of “DC Daily” on DC Universe. It was an odd choice, though, to extend this feature with other Elseworlds content that I am pretty sure was lifted directly from the “Gotham by Gaslight” DVD. It also is bothersome to me that it seems WB is getting cheap with extras, with so many being things that we will see on every DVD/Blu-ray set in the range. This and “Villains: Modes of Persuasion,” another featurette, are both features that I’m pretty sure will be on every DC TV release; the latter even features clips from Krypton and Gotham which aren’t even Arrowverse shows. That’s actually a little jarring, since the feature covers two different variations of Ra’s al Ghul, for example. There are deleted scenes from multiple episodes in the season on this release, and there’s a gag reel. I used to love gag reels, but I feel like I’m over them by now.

And, as mentioned, the crossover episodes are here, which is great.

Packaging and Design: I love the cover art and wish it was something that we could get a textless version of. It’s probably a better choice than an “Oliver in Prison” image which could have been what they might have gone for.

Is It Worth It? In this time where everything is on Netflix or some streaming service, it’s harder to decide whether or not to buy a DVD or Blu-ray set, but I say this is, simply because the higher definition looks beautiful and the extras are fun to watch. And, hey, digital copies are included as well, if you want to have them handy or share with a friend. I’m impressed with what Beth Schwartz and her team brought to the penultimate season of Arrow and it’s also a great refresher as the final season approaches.

Purchase your copy from Amazon.com and support GATV! 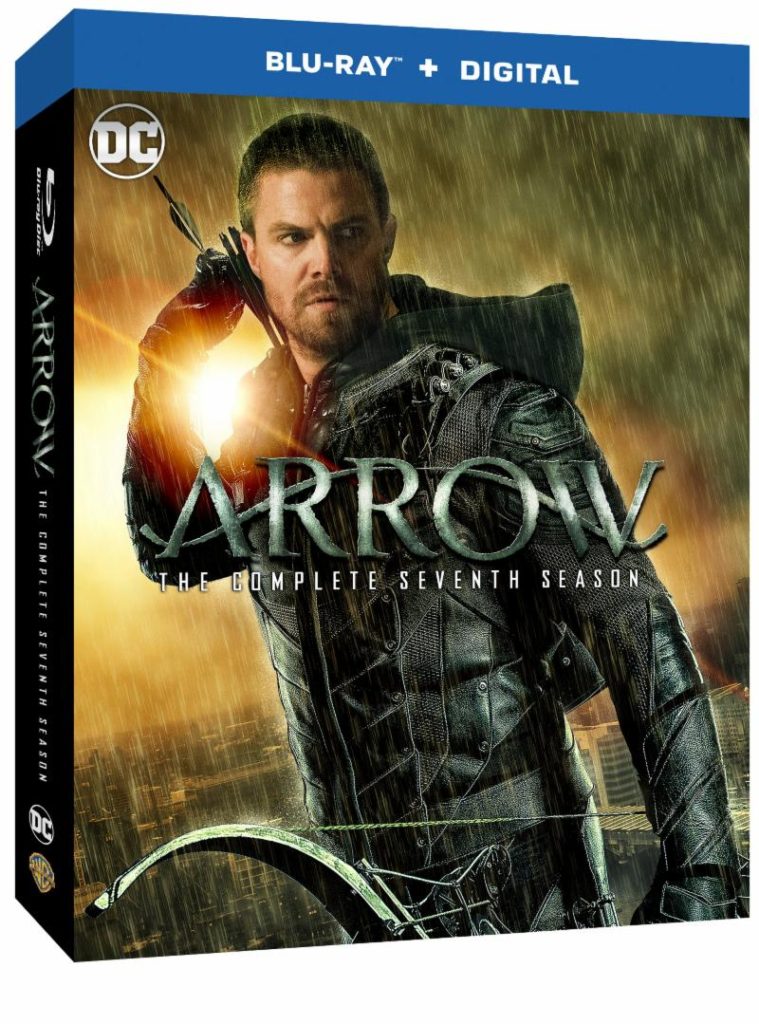