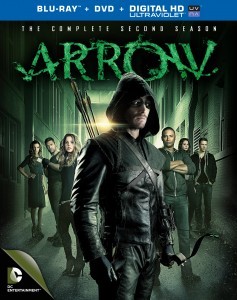 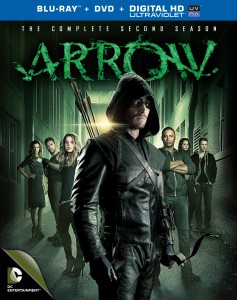 While many may be lamenting that Arrow Season 2 won’t be available on Netflix until October 8, they should know that you can get the entire second season in high definition with a ton of extras already, as Arrow: The Complete Second Season hits Blu-ray and DVD today (September 16). How’s the set? We’ve got a review!

The Episodes: All 23 episodes of Arrow Season 2 are included plus the “Year One” bonus recap that aired before the season started. This is beneficial, because now, if you want to hook someone onto the show who might want to jump in on Season 2, there’s a way to do that.

As for the episodes: You’ve read this website, you’ve probably already seen them all and seen how good they are. But really, it feels like the show’s creators saw what worked and what didn’t in Season 1 and built on it. Characters were given new purpose, and Season 2 had a villain that could genuinely scare the audience – especially when he [spoilers] [spoiler]. It’s not a knock on the first half of Season 1, but Season 2 is a much more consistent package, and it earned Arrow’s place as the premier comic book show on television.

I would have never guessed that we would see a [Black] Canary on Arrow as early as Season 2. Or Deathstroke. Or Sin. Or Barry freaking Allen, the Flash. But we did. And Season 3 promises even more. I really appreciate that Arrow holds nothing back so that we don’t have to wait 6-8 years to get to the good stuff.

The Extras: Warner Home Video didn’t skimp here. In addition to the “Year One” special, there’s the 2013 Comic-Con panel, and an arsenal of special features. Including:

From Vigilante to Hero – This is the longest featurette on the disc, with actors and producers talking about Oliver Queen’s journey to the heroic side.

How Did They Do That? The Visual Effects of Arrow – This one mostly shows specific sequences, like the ship by the island or the plane that everyone jumps out of in the season premiere, and shows us how it’s done.

– Wirework: The Impossible Moves of Arrow – This featurette makes you realize just how much the Arrow stunt team does, and spotlights some amazing wire sequences you see on the show. They make it look like people are really flying through the air, but are they? Nope. This might be my favorite of the behind the scenes features.

– Gag Reel – Some of these are genuinely quite funny, especially the bloopers involving clumsiness. As I say in other DVD reviews, I never found going blahblahblah at the camera to be that funny, but oh well.

– Deleted Scenes – Possibly the biggest treat. To fit in a certain timeframe on the show, good stuff often gets cut. Early on in the season, a lot of what was cut seemed to involve Laurel, which might alleviate some of the fan reaction to her early on, because we weren’t seeing the entire story. The scenes for the season finale, “Unthinkable,” are amazing – you can read about those here, puddin’.

Graphics & Sound: Arrow on Blu-ray looks fantastic. If you’ve seen it this way before, you know what I mean.

The Packaging: I also like the look of the box art, and how the hood is up on the cover yet not on the inside.

Is It Worth It? If you buy only one Blu-ray set this year… this is the one to get. I do wish there had been at least one episode commentary, but we can’t get everything, right?