Arrow: The CW Releases A Description For Season 2 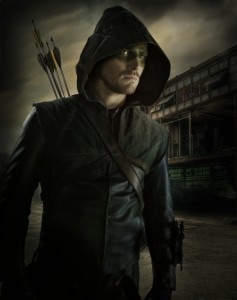 Just yesterday, it seems we were wondering when Season 2 will begin… The CW has now announced that the 2013-2014 season, for them, will begin in October 2013. It’s a long wait, and we’ll let you know if anything changes, but there you go. An actual date announcement will come very late in June or early in July.

They did, however, reveal a short description for Arrow Season 2 which we will soon add to our Spoilers page:

After a violent shipwreck, billionaire playboy Oliver Queen (Stephen Amell) was missing and presumed dead for five years before being discovered alive on a remote island in the Pacific.  He returned home to Starling City, bent on righting the wrongs of his family and fighting injustice.  To do this, he creates the persona of Arrow – a vigilante – and allies himself with former military man John Diggle (David Ramsey) and computer science expert Felicity Smoak (Emily Bett Rickards), while keeping his secret from those closest to him.  Based on characters appearing in comic books and graphic novels published by DC Comics, ARROW is from Bonanza Productions Inc. in association with Berlanti Productions and Warner Bros. Television, with executive producers Greg Berlanti (“Green Lantern,” “Brothers & Sisters”), Marc Guggenheim (“No Ordinary Family,” “Eli Stone”) and Andrew Kreisberg (“Warehouse 13,” “The Vampire Diaries”).  Melissa Kellner Berman (“Eli Stone,” “Dirty Sexy Money”) is co-executive producer.

Excited? Again, here are some things you can do over the hiatus. Stay tuned later today for more cool stuff!