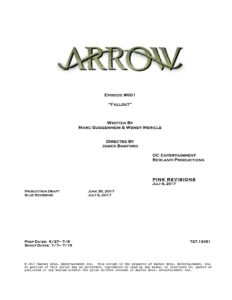 Production is now starting on Arrow Season 6, and while we announced the premiere director as James Bamford here on GreenArrowTV a few days ago, we didn’t have an episode title or writing credits.

Thanks to Executive Producer Marc Guggenheim on Twitter, we have those answers!

The Arrow season premiere is called “Fallout” and it is written by Marc Guggenheim and Wendy Mericle. The episode is directed by James Bamford.

No details about the season premiere are known yet, though Katie Cassidy has tweeted that she’s back in Vancouver. It’s also said that the Season 6 villain is someone long-awaited by comic book fans, though for the life of us, we’re not very good at thinking of villains who’d work on TV that we haven’t seen already.

Surely we will know between now and the October 12 season premiere!