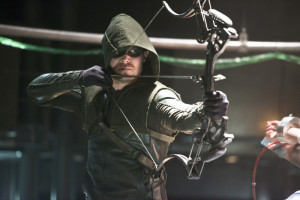 The CW has released an official spoiler description for the May 14 season finale of Arrow.

The concluding episode of Arrow Season 2 is called “Unthinkable.”

OLIVER MUST DECIDE ONCE AND FOR ALL IF HE’S A KILLER OR A HERO — Slade (Manu Bennett) moves forward with his plan to kill one more person in Oliver’s (Stephen Amell) life. While Oliver has fought all year to be more than the killer he once was, when Slade kidnaps someone close to Oliver’s heart, Oliver is pushed to the edge and realizes sometimes it takes doing the unthinkable to stop the monster. Meanwhile, Diggle (David Ramsey) takes on Amanda Waller (guest star Cynthia Addai-Robinson) with a little help from some friends, and Thea (Willa Holland) turns to Roy (Colton Haynes) in her time of need. John Behringdirected the episode with story by Greg Berlanti and teleplay by Marc Guggenheim & Andrew Kreisberg (#223).