Arrow Ratings: 2.56 Million For “Darkness On The Edge Of Town” 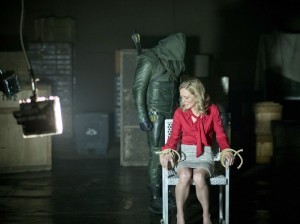 We’ve pointed out before how ratings figures tend to go down a little bit as we get closer to the end of the season. Why that happens — whether it’s people thinking “meh, I’ll get the DVD in a few months,” better weather, or whatever — could remain a mystery.

Either way, despite being amazing, the Arrow episode “Darkness On The Edge Of Town” had only 2.56 million viewers in the overnight ratings, according to TV By The Numbers. Extra competition from a Wednesday episode of The Voice probably also didn’t help matters.

On the bright side, the show kept its target young-adult demo and scored 0.9/3 again in the Ages 18-49 demographic. Who knows; it may have done even BETTER among people younger than that.

If you missed the episode, but want to have it to keep forever, it doesn’t appear to be on iTunes yet, but it does appear to be on Amazon Instant Video. If you did see it, come talk about it on our forum!

But of course now, we have more pressing matters: SEASON FINALE ON MAY 15! Take a look at some screen captures.