Arrow Premieres Tonight! Here’s What You Can Find At GreenArrowTV.com 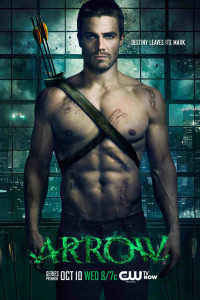 After months of anticipation, it’s finally time for Arrow to hit the air! (October 10 at 8PM on The CW)

GreenArrowTV.com was opened as soon as the project was announced, and was the first website devoted entirely to the TV series Arrow. It’s run by the same folks as KryptonSite.com for Smallville, so if you liked that site, hopefully you’ll like this site. Our goal is to be your top resource for all things devoted to the show.

Since going to a new website can be intimidating, here are some highlights that you can find at GATV so you can better navigate:

Arrow FAQ – This list of frequently asked questions should be able to tell you [almost] everything you need to know about the show itself.

Images – People like pictures, right? This is where we’ve organized all image posts, including pictures from upcoming episodes. 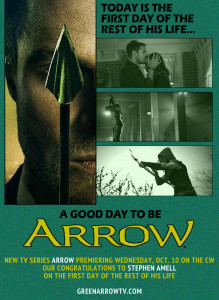 News Archive – You can find all past Arrow news articles and coverage here. The page for new news is, of course, the home page.

The “Where Do I Know You From?” Files – Stephanie Hall has created a weekly column where she looks at past credits of the show’s actors, so you, too, can know where you knew them from.

Social Media – GreenArrowTV is on several social media sites, and if you want to give us a follow, it would be appreciated! GATV is on Twitter and Facebook and you can also find us posting Arrow stuff on the KSiteTV Tumblr page.

Videos – As many trailers as we have possibly gotten our hands on can be found here. 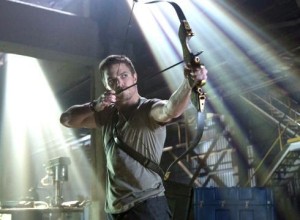 Forum – You’re all invited to come by our Arrow forum at KSiteTV to discuss spoilers, the cast, basically anything you want. We already have a Countdown thread up for tonight’s episode and a whole forum set up for talking about the Pilot. The Countdown thread will also serve as a Live Discussion thread while the episode is on, so hopefully we’ll see you there.

Reviews & Recaps – Several members of the KSiteTV Team will be writing weekly recaps and reviews, and you can expect an episode guide here as well, so stay tuned!

Arrow Spoilers Page – All of the upcoming episode details in one place. If you thought the KryptonSite Spoilers Page was a nice thing, hopefully this will give you the same satisfaction.

All in all, hopefully you’ll find something you like here at the site if you find you enjoy Arrow. The premiere is great – premieres tonight (October 10) at 8PM on The CW, and in Canada as well – so feel free to hang out, poke around, and aim for justice.