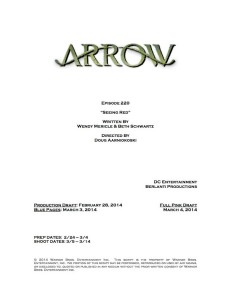 While a “special announcement” is keeping them from revealing the title for Episode #2.19 right now, Arrow Executive Producer Marc Guggenheim did at least reveal the title for the twentieth episode of Arrow Season 2 this morning.

Episode #2.20 is called “Seeing Red.” It is written by Wendy Mericle & Beth Schwartz and it will be directed by Doug Aarnioski, and we can expect to see it in late April. The episode begins shooting today! As for that title… could it be a Red Arrow allusion? Or something else?