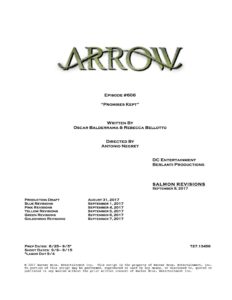 The title and credits for the sixth episode of Arrow Season 6 have been revealed by Executive Producer Marc Guggenheim on Twitter.

The episode is the second part of the Deathstroke 2-parter that begins with “Deathstroke Returns,” and it is called “Promises Kept.”

Oscar Balderrama & Rebecca Bellotto wrote the episode which is being directed by Antonio Negret.

Read some more Season 6 spoilers on our Arrow Spoilers Page!