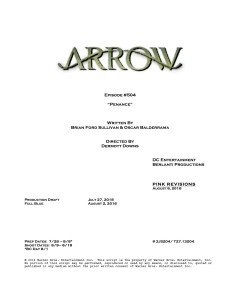 Before we get to episode #5.5 “Human Target,” what’s coming the week before?

The fourth episode of Arrow Season 5, now starting production, is called “Penance,” as revealed by Marc Guggenheim on Twitter today.

Brian Ford Sullivan and Oscar Balderrama wrote the episode which will be directed by Dermott Downs.