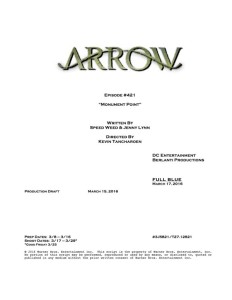 Arrow Executive Producer Marc Guggenheim has revealed a title and credits for the 21st episode of Arrow Season 4.

Episode #4.21 is called “Monument Point” and it’s written by Speed Weed & Jenny Lynn. The director of the episode is Kevin Tancharoen.