As you may know if you’ve seen the gallery of preview images, Katie Cassidy‘s Laurel Lance is back in the celebratory 100th episode of Arrow, airing at 8PM this Wednesday night on The CW.

It shouldn’t be considered a spoiler that everything is not what it seems to be… that somehow, Oliver is in a “Flashpoint” of his own, though as a result of different circumstances. Parallels can also be found with last year’s Supergirl episode “For The Girl Who Has Everything.” If you’re guessing that this altered reality has something to do with the alien Dominators, head to the front of the class. This situation allows many figures from Arrow’s past to return for Episode 100 — including Susanna Thompson (Moira), Jamey Sheridan (Robert), John Barrowman (Malcolm Merlyn) and more.

Following a screening of the crossover episodes, Executive Producers Marc Guggenheim and Andrew Kreisberg participated in a press Q&A where Katie’s return was asked about. 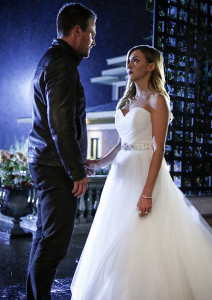 “She is such a central figure to the show,” Kreisberg said about the decision to bring Laurel back for the centennial episode. “I mean, she was the second lead on the show, and even though the show has evolved, Laurel is at the heart of it. She was Oliver’s great love, she’s Sara’s sister, she’s Lance’s daughter,” he continued.

Andrew was reminded of Laurel’s role in those early episode when recently catching some Arrow repeats on TNT. “Watching those early episodes, so much of it revolved around her relationships with all of these characters,” he explained. “I watched the episode ‘Vertigo’ where she’s arguing with her father about how much Thea reminds her of Sara, and how he should go easy on her… I’m sitting there listening to that, and thinking about ‘God, they didn’t even know Sara was alive yet.’ Even if we get to 200 episodes, Laurel will always be at the heart of the series and be such an important character, and then on top of that, Katie Cassidy will always be so important to us. So, we were so happy that she agreed to come back, because she is part of the family, both behind the camera and in front of it.”