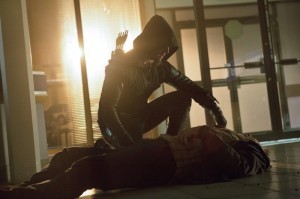 Summary: An episode that gives us a chance to connect with the supporting players and the cast while offering Oliver a greater reason for his mission.

Oliver sets his sights on another name from his father’s list but Diggle persuades him to put a stop to a bank robbery spree by a group known as the Royal Flush Gang. Meanwhile, Tommy follows Thea’s advice to convince Laurel he’s a worthy guy by throwing a fundraiser for CNRI. Moira’s attempts to connect with Oliver are thwarted by his constant running off.

One of the main criticisms floated about the series to date is that the supporting characters haven’t been given a whole lot to do to ingratiate themselves with the audience. This has also managed to limit the ability to showcase the chemistry of the main cast as a whole, something that can hurt a long-form series that’s asking us to spend time with them week after week. Seeming to recognize this, the Arrow crew serves up a strong episode that helps us get to know — and like — everyone.

Chief benefit of this branching out is Ollie’s best friend, Tommy Merlyn. So far pushed to the sidelines by the razor focus of Oliver and the show on his mission of vengeance, party boy Tommy gets the chance to show more sides to his character. While it’s still a bit disappointing in setting up his early arc on the series as a love triange with Ollie and Laurel, it’s welcome to see Tommy as more than comic relief and the representation of the past life Oliver has moved beyond. Colin Donnell does a fine job presenting levels and a full history in his performance that will benefit the show in the long run. He manages to maintain the charm he’s flashed in earlier episodes without the accompanying frat boy smarm of his exchanges with his best friend. This is all especially evident in his interactions with Willa Holland’s Thea — the two play off each other very well — and builds a nice relationship that will allow avenues to explore this world beyond the scope of the week-to-week crimefighting.

Building upon her trajectory in the last couple of weeks, Moira Queen (Susana Thompson) also gets the opportunity to show off more of her soft underbelly. Feeling lonely as her husband has taken to the road, Moira reaches out to a son who is too busy in his crusade to offer what she needs. They’ve played at the impact Oliver’s singular focus since returning from the island has had on his family but finally take a moment to have him address it when Moira calls him out. Thompson continues to do a stand-up job in what initially seemed to be a bit of a one-note character, offering a vulnerability that actually softens Oliver’s character as well. Some might complain that ending an episode of a crime noir series on an intimate family moment in a diner might reek a bit too much of the “CW style,” but this was a key setpiece in allowing the series to grow. Plot and action will only get you so far. It is these small human moments that build a lasting impression on your audience.

Even while providing more insight into the people around him, the episode doesn’t forget to focus on Oliver. In particular, it presents a landmark moment in Oliver’s long-term career as the vigilante we will eventually come to know as Green Arrow. Much as sister series Nikita has built a team around its main character that provides both support and guidance, Arrow is quickly establishing one of its own. In this case, Diggle (David Ramsey) broadens Oliver’s horizons by insisting that he get involved with helping fight extraordinary crime outside of the scope of his father’s list of names. This not only opens a wider possibility of stories but actually alters the makeup of Oliver’s mission that could profoundly impact him as a man. Diggle has been presented as a moral compass for Oliver, the path by which he can accomplish his goals but not at the cost of his soul being consumed by his quest. Though it plays a bit at being a cheat, there is some savvy to having Derek Reston, the father and King in this interpretation of the Royal Flush Gang, be a former employee of Queen Consolidated who was directly affected by Robert Queen’s decisions. This not only drove home the point of the sins of his father, but also allowed a personal connection that made a stronger case for Diggle’s argument.

After a bit of a stumble last week, Stephen Amell roars back strong with a well-measured performance that shows Oliver’s tortured soul but also his gentler side. His scenes with Ramsey can once again be savored, but it’s the work he does with guest stars Currie Graham and Jamey Sheridan and with Thompson that really stand out. The scene in the Glades bar with Graham’s Reston not only offered some sympathy for the RFG but showed insight into Oliver as a man. Oliver gave Reston a way out that he knew he wasn’t likely to take but still provided the opportunity. Throughout, this was informed by being face-to-face with the realities of his father’s deeds and Amell played it small, subtle, and perfect. This in contrast to the big, meaty reactions to the hallucinated conversation with Sheridan’s Robert on the island that were appropriate and honest. And finally, with the warm conversation between mother and son over a burger dinner that was light, fun and genuine that again showed a much needed connection between the cast. Amell deftly handled all that was thrown at him this round.

Speaking of this round, special note should be made of John Behring and Glen Winter, director and DP respectively of this week’s episode. Specifically, their work with the Royal Flush Gang’s opening bank heist and two altercations with Oliver felt exceptionally cinematic and the pacing of the episode throughout was spot-on. In addition, the atmospheres created for both the Glades bar scene and the final scene at the Big Belly Burger were not only character driven but made a real connection for the audience.

Connection is really the name of the game. While one — and many, given the relatively strong and consistent ratings the show has enjoyed these six weeks — can appreciate and enjoy the action and plot-driven aspects of the series, there needed to be moments when it gave us peeks into the lives and personalities of the characters beyond Oliver to keep us involved and invested. This episode afforded such a thing and allowed us to connect more to the overall cast. By granting them more time and individual plotlines, all while not neglecting Oliver’s campaign and growth, it will deepen and enrich this world in compelling ways that will keep us coming back for years to come. This was a great and necessary first step toward that end.

While not perfect, this is the kind of episode of Arrow I’ve been waiting for.

Both a strength and a flaw of the show thus far is that it’s been as targeted on its own mission as Oliver himself is. It’s all serious business, and it’s got to keep moving the plot along to make sure it gets to wherever it’s going to go. This hit-the-ground-running execution gave the show a unique energy right from the start, but it was only a matter of time before it would run out of steam, or worse, hit a brick wall with all that momentum. It was smart, then, to take a bit of a breather. “Legacies” isn’t a light or fluffy episode by any means, but like Oliver’s journey this week, it loosens its grip on its own securities and doesn’t look at everything so cynically or with as much purpose.

It’s odd for a superhero show to wait until six episodes in for the hero to realize he can stop crimes in progress, but it provides an interesting scenario for why someone with the skills of Oliver would try to branch out and help people who don’t have an effect on his larger goals. Ultimately, the show doesn’t pull this off particularly well. Oliver switches from being stubborn to agreeing with Diggle’s suggestion without much fanfare, and even then it doesn’t really matter since the Restons were still connected to Oliver, anyway. There’s the bit at the end where Diggle gives Oliver some satisfaction that the treatment he covered for the cop paid off, but since Oliver never met the cop or had any investment in him, it doesn’t mean much. Oliver still has yet to stop a major crime that has nothing to do with his family. So while the episode does a nice job of making the scenario fun and intriguing, there isn’t as much growth on Oliver on that end as there could be.

That’s not to say there’s no growth, though. The best part of the episode—and what gave it a lightness the first five have been missing altogether—is Oliver’s relationship with his mother. Seeing Oliver treat his mother to a late night burger to ease her pain is very heartwarming, and it’s the first time we’ve really, truly seen Oliver be a decent guy outside of shooting arrows at mean rich people. It validates what he learned from the Restons, as well as a downright chilling flashback with a hallucination of his father. It seems a big part of his overall arc is learning to care for his family, and the episode plays this very well. Susanna Thompson was particularly stood out and made Moira incredibly sympathetic in this hour.

We’ve also thrown Thea into what’s now a love quadrilateral, though given her age there’s no chance she’ll come out on top. It’s fairly standard TV drama fodder, but Colin Donnell is immensely entertaining as the increasingly less-annoying Tommy as he tries to deal with these awkward relationship struggles. Willa Holland was also strong this week, so while the content isn’t anything new, the performances keep it feeling moderately fresh, at least.

While not as much was done with the “Oliver tries out being a real hero” concept as there could have been, this still remains to be one of the most entertaining hours of the show, thanks to a balance of more warmness and less gritty cynicism.