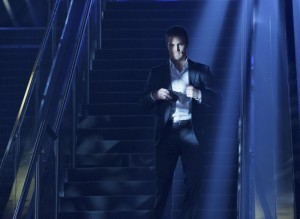 Since the series premiere of Arrow is such a big deal, BOTH of our reviewers, Matt Tucker and Derek B. Gayle, will be covering this one!

Summary: A solid opening chapter introduces us to Oliver Queen, a man lost for 5 years who is back to clean up the crime plaguing his city, and the people and complex relationships that surrounded his former life.

Recap
Oliver Queen, heir to a conglomerate fortune, is rescued from a remote island in the Chinese sea 5 years after the boat he was on with his father and crew sank in a vicious ocean storm. Lost in the storm was Sarah Lance, daughter of Starling City Detective Quentin Lance and sister of Laurel, Oliver’s girlfriend at the time he was cheating on. Back in town, Oliver discovers that his mother has already remarried and that the life of partying frat boy he once swam in is ready to welcome him back with open arms. Not so open, Laurel blames Oliver for Sarah’s death and the betrayal of their relationship.

Oliver has other plans, spurned on by his father’s dying request that he make right the wrong things going on in Starling City. His experiences on the island have trained him to be a physical force, and after attributing a rescue from his own kidnapping to a man in a green hood, he assumes the identity. Employing his skill with a bow and arrow instead of a firearm, Oliver targets a criminal fund manager who has plagued the city. Stealing the criminals funds and giving them to various organizations the man has slighted over time, Oliver establishes himself as a new thorn in the sides of the criminal underbelly and the cops led by Quentin Lance investigating him.

Attempting to reconnect with the resistant Laurel, Oliver makes the choice to push her away to protect her from his chosen crusade. Using a party thrown by his old best friend Tommy, who has his own romantic past with Laurel in the intervening 5 years, Oliver tries to reclaim his playboy image to present a public face while discovering that his younger sister has gotten into seedy aspects of the scene in his absence. Meanwhile, it’s revealed that Oliver’s own mother, Moira, was behind the kidnapping, trying to extract some information her late husband might have passed on to their son before dying.

For a more in-depth recap of the episode, pay a visit to our handy episode guide.

As Warner Bros./DC Entertainment continue to stumble to plot their way through a [nearly] post-Nolan film landscape, they’ve discovered they’ve had a fertile breeding ground to take advantage of their heroes in their own backyard for years. Long the home of the little show that could, Smallville, the CW network — half-owned by WB — has flirted with adapting comic properties for years. From the failed Birds of Prey series to shows that never got off the ground like Global Frequency, The Flash, The Graysons, and Raven, the company made attempts but largely dismissed the potential that having your own network provided.

With regime change at the network level, focus has shifted and suddenly the CW is alive with possibilities. As the success of Smallville came to a close, the new brass recognized the small-by-broadcast-network-standards but devoted audience that they were losing and actively began sussing out properties that could help them recapture and maintain those market demos. While the idea of a Green Arrow-fronted show had been batted around for years as the character became a prominent figure on Smallville, this project didn’t come together until the year following that show’s departure. It’s both a shrewd choice and somewhat of a no-brainer.

Yes, they do have to contend with an audience that had come to know of the hero only through Justin Hartley’s performance, but it’s clear at the outset of this pilot episode of Arrow that this is a different beast altogether. More important, this is the kind of show that can retain a young and young-ish male audience while growing a broader base as well. Perhaps the most relatable — a key marketing buzzword — of heroes to the broadest audience possible has proven to be Batman. With particular note to the “real world” take of Christopher Nolan’s films, as the Dark Knight is all but exclusive domain to WB’s features division, Green Arrow and Oliver Queen are suitable stand-ins for a long-term TV project. A guy without powers who has built himself into a formidable force to take on the dark corners of the world, for right and for revenge, is supple material for an on-going.

What’s specifically great about this adaptation is that it borrows heavily on a celebrated period of its source’s history. The show is clearly modeled on the Nolan worldview of heroes, but there is a distinct period in the comics where writer and artist Mike Grell stripped Oliver Queen down to his bare essentials, pulled him away from superheroics, and got down to the nitty gritty of crimefighting. By concentrating on the more human level aspect of Green Arrow, it allows for more practical action and less reliance on special visual effects that can bog down a show’s budget, particularly on the limited level that CW shows can have.

The also gives the show a chance to really ground everything in character, which it admirably attempts to do in the pilot. With some creaky acting and clunky dialogue at points, the show clearly needs to settle into itself. There are plenty of relationships and histories established in just the first hour, though, that it has a lot of room and raw material to grow. Series star Stephen Amell, physically wonderful throughout the episode, needs to find some modulation in his role but he’s got a superb screen presence that lends itself well to both Oliver and the mysterious green-hooded man who is yet to be identified by any moniker. It will be interesting to see if he offers any differentiation between his civilian life and vigilante counterpart as the series moves along, as he doesn’t do much but change clothes to distinguish them here. It doesn’t really hurt the hour, as Oliver is decidedly focused on one goal that keeps everything moving briskly, but it makes one wonder how he’ll interact with the normal people in his life in both roles.

The majority of the other actors still seem to be finding their parts as well but there is enough charisma and chemistry between them that time and the rigors of production should help. One standout is David Ramsey as John Diggle, the man hired by Oliver’s mother to be his bodyguard after Oliver is kidnapped and escapes at one point. Along with Jamey Sheridan in the role of Oliver’s father Robert, Ramsey appears the most “at home” in his role from the outset and that added some zip and substance to his scenes with Amell. Colin Donnell’s Tommy Merlyn offers some interest, especially knowing of the character he’s based on, but he’s written a bit broad in the episode in an effort to establish Oliver’s past as a party boy.

One significant change in this adaptation — well, two, actually — is that Oliver has surviving family in his mother and his sister Thea. Amell makes probably his strongest connection with Willa Holland, playing the teen “Speedy” who turned to the party and drug lifestyle in the wake of her father’s and brother’s deaths. Introducing a young sibling allows us to see Oliver in a different light than just the Arrow and the public image he’s trying to establish in his return. It’s not necessarily groundbreaking material to cover but it appears it will help to humanize the one-track-minded elder Queen.

The show also establishes early on that Oliver’s mother is more intimately connected to his now established crusade. What’s unclear is how his father is connected to everything and just what it is that Moira Queen is after. Willing to have her newly resurfaced son kidnapped to determine what Robert said to him in his final hours shows just how high the stakes are for her but without a shade more insight into the nut that she’s after it’s a bit of a soap-operaish reveal to end the episode. Yes, you want to leave questions on the audience’s mind to bring them back but there should be even some subtle foreshadowing that one recalls in hindsight that sells such a reveal and provides some context. That said, setting up that hidden antagonistic relationship between mother and son is a sharp decision that can yield compelling drama.

Technically, the well-established professional efforts make for a fine production. There is an established look and feel right from the get-go and it doesn’t feel like the show has to search for a visual identity. There are few lower quality visual effects shots — the “rear projection” when Tommy and Ollie are driving in the car, the Arrow’s escape from Hunt’s office by zipline — and the odd choice to piggyback on Oliver’s shoulder through two parkour-style wall drops during a chase scene, but the episode is shot well and directed with a surehand by veteran director David Nutter. In particular, the two action sequences with the Arrow at Hunt’s limo and in Hunt’s office are some of the best action photography seen on the TV scale in recent memory. Keeping that kind of pace and style bodes well for the effectiveness of the series going forward.

Overall, this is a capable start to a series that looks like it’ll be fun but also straddles the line with being a more mature drama. That’s a compelling mix that provides a nice counterpoint to the CW’s other high points, Nikita and Supernatural. It also fills a niche that is currently missing for broadcast networks.

Come talk about the Arrow pilot on the KSiteTV Forum! – Read Derek B. Gayle’s “Pilot” Review