Advance Review: Arrow Season 5’s “Legacy” Brings It All Together

I will be the first to openly admit that I was a bit harsh on Season 4 of Arrow, and I know I was not the only one here on the site who had been. What I might not have realized at the time, after watching the Season 5 premiere “Legacy” which airs on October 5, is that those feelings and responses from the audience might have been intentional. 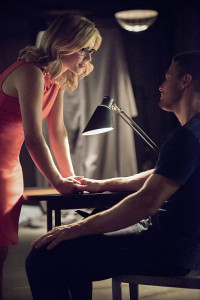 It’s not a lie or an exaggeration to suggest that opinions on Arrow Season 4 were very mixed. It’s also true that the season started with a lot of things that different people wanted to see: Oliver and Felicity, together, happy. Laurel Lance, capable and respected as the Black Canary. John Diggle, finally on the way to learning more about H.I.V.E.. Thea, perhaps with some rage issues but an awesome member of Team Arrow as “Speedy.” Felicity, with new responsibility running Ray Palmer’s company but still able to do it just the same. Malcolm Merlyn ruled the League of Assassins. Team Arrow was a cohesive, organized unit, and even Damien Darhk seemed on his way to getting what he wanted with mass genocide, all with a family taken care of and by his side.

Even as the season progressed, some of the characters still got their “wins” that were then sadly lost just as easily. Laurel got her sister back, and then she went off in the Waverider to parts unknown. John Diggle’s brother returned, only to betray him. Oliver and Felicity had their bliss, only to have the William drama fracturing their romantic relationship. Laurel, Oliver’s oldest still-living friend, lost her life. Even Quentin Lance got some love… and that’s not taken away yet… right?

When looked back on now, I think that might be what Arrow Season 4 was about: Getting everything you wanted and then literally having it pulled away. It happened to the characters; it happened to some of the fans. So upon watching the Arrow Season 5 premiere, what is it I see? Rebuilding. And Season 5, I’m assuming, will be that journey. Sometimes getting everything you want makes it hurt more when those things are now missing. 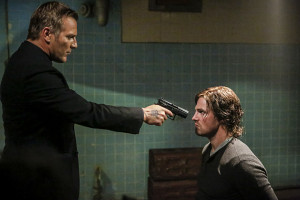 As Season 5 begins, Oliver Queen is broken. He’s harsh and deadly, much like he was before there was a Team Arrow, “original” or otherwise. His losses are getting to him, and his job as the new Mayor of Star City is suffering. From this, I will assume a big part of Season 5’s journey is the road back. This plotline parallels very well with the flashbacks, which tell the tale of the last of Oliver’s “five years in Hell,” this one dealing with Russia and the Bratva. Anatoly (David Nykl) is back. The flashbacks have a relevance to present day that I haven’t felt since Season 2. There are words from Anatoly in the season premiere that are just as relevant to “five years ago” as they are to now. Hopefully, as five-years-ago Oliver regresses, the modern-day Oliver will evolve back into the Oliver Queen that he had started to become. 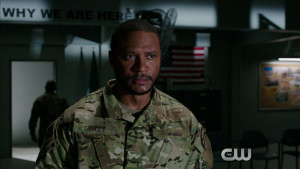 Interestingly, a lot of the characters remind me of where they were 5 years ago: John Diggle, while not seen much, is the voice of reason. Felicity isn’t the love interest, but she still has the good heart to try and do what’s right, and she may have a better solution for what to do about the new crop of vigilantes than Oliver has. (We haven’t seen, yet, how she’s going to deal with what happened at Havenrock last year, but it’s been promised). Quentin Lance, we’ll find, is not in a good place either. There is one exception, though: Thea (Willa Holland) seems to be in a great place. No rage, no real desire to do the crimefighting thing anymore… just a maturity and a competence that Mayor Handsome (Oliver) doesn’t seem to have. When she puts on a red hood again, and we know she will from the promo images, it will be for a very good reason.

We get a glimpse of some of Star City’s newest heroes, and the one I am the most excited about is Wild Dog/Rene Ramirez as played by Rick Gonzalez. The way Wild Dog moves is so different from any other character that I think he’ll add a great dynamic to the show. I’m disappointed there wasn’t a Casey Jones crack about his hockey mask, though. I’ve Tweeted it but it bears repeating: I really, really want a Wild Dog jersey now, and the character design for the show is one of the best I’ve seen in the show’s five-year run. Some of the other “new” vigilantes show up on computer screens, including a sketch of a very George Perez-looking Vigilante.

(I should point out one of Star City’s former heroes, the Black Canary, is memorialized with a statue. While not as bad as the infamous Lucille Ball “Scary Lucy” statue, it’s not the most flattering likeness, but it’s the thought that counts, right? We do actually see Katie Cassidy’s Laurel in the premiere, by the way, though her final words will surely be up to interpretation.) 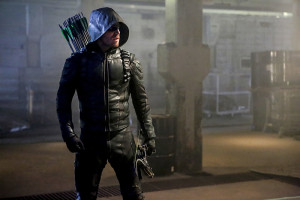 James Bamford directed the first two episodes of Season 5, and the premiere has at least two “Holy $#!+balls” moments as Stephen Amell once put it on Twitter. In this day and age where almost everything is given away by paparazzi photos or trailers, I’ve missed that. Action-wise, it feels like Season One; actually, a lot of the premiere feels like the show’s earliest days, and I like that. In a world where The Flash and Supergirl do the light and happy so well, I prefer my Arrow to be a darker alternative. Chad L. Coleman as Tobias Church is a villain who could actually be scary but not fantastical; I’ve really wanted to see a villain like that, and more street-level stories.

Season 5, at least from the premiere, is not a “shipper show.” Yes, Oliver and Felicity interact. Yes, there is the matter of her new boyfriend. But thankfully, that is on the back burner as the new challenges and mission are at hand. Oliver at this moment is too fractured to be with anyone; the notion that he’ll ultimately listen to old friends and family like Thea, Felicity, and Diggle shows that it is at least possible for him to listen and work with others again. Is he afraid to open his heart after all of the loss from last year? Maybe, but that’s part of the journey that we’ll see. 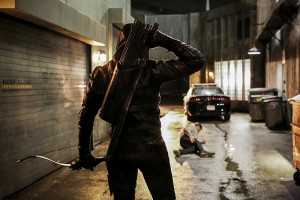 So what is Season 5 about, judging from the season premiere? I think it’s about redemption and rebuilding. Maybe this time Oliver can get Felicity back and something can form for them that doesn’t come after him being a jerk or lying to her. Maybe Quentin can find his true calling in Star City. Perhaps John Diggle can forgive himself for what happened with Andy, and maybe the new heroes can stand tall like the ones that came before them. It’s not going to be a “fun” journey, as I’m sure the flashbacks will also get very dark this year. I’m really curious to see where the show goes next, and if the direction and themes are intentional and this was planned all along, I am very impressed. While Supergirl’s premiere might have been my favorite and The Flash premiere was the show’s usual level of awesome, Arrow is the one that has me most excited to see what the whole season will bring.

Arrow “Legacy” airs Wednesday, October 5 on The CW. You can see some preview images from the season premiere here.