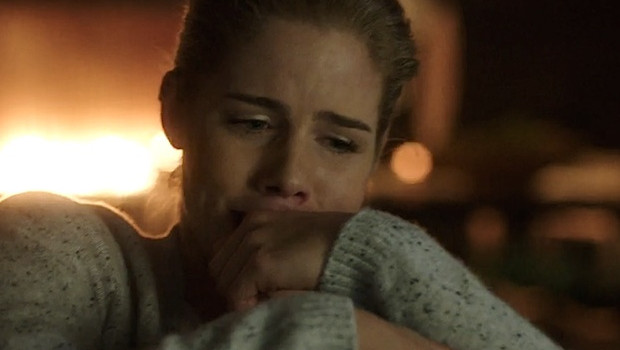 A Darker Arc For Felicity In Season 5B

New episodes of Arrow won’t be here again until January 25, but thanks to TV Line, we have some clues as to where at least one character will be going when the show comes back: Felicity Smoak, as played by Emily Bett Rickards.

So what’s happening? It seems that Felicity will be taking a darker turn in the wake of what happened to her boyfriend, Billy Malone, in last week’s episode “What We Leave Behind.”

“One thing Felicity is not going to do, I can tell you for sure, is blame Oliver. She recognizes the manipulations that have led to this situation,” Arrow Executive Producer Wendy Mericle assured TV Line. “Her heart is broken in that last moment for Oliver and for Malone and for herself.”

“Felicity has set her sights on Prometheus. This season we have said we’re going to take her to a darker place, and you’re seeing the genesis of the reason why, right here,” she added.

TV Line’s piece also notes that Felicity “is going to meet some people who are both a bit tied to her past but also very much tied to this new future she’s contemplating, and that’s going to draw her away from the team and lead her to do some things that are pretty morally questionable.”

So, we’re going to see her dad again, right?

You can read the entire TV Line article and interview with Wendy Mericle here.

UPDATE: Writer Brian Ford Sullivan also expanded on this, talking about what story from the season’s second episode would “still be paying dividends” later this year.

“Malone’s death uncorks what Felicity bottled up (re: Havenrock). Events in 510-512 force her to re-examine her life (or lack of) as of late,” Sullivan Tweeted. You can see his Tweet here.