Would Stephen Amell Be Interested In Doing The Justice League Movie? 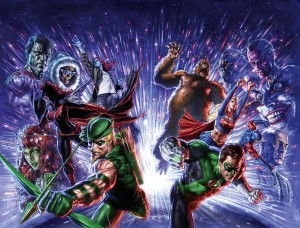 Especially since Man Of Steel hit, there has been a lot of talk about Warner Bros. and DC Entertainment doing a Justice League movie… and, of course, the press has asked Stephen Amell about it… a lot.

He took to his personal Facebook page today to talk about why giving an honest answer is the best policy:

Here’s how a press line works: A reporter asks me if I’d be interested in a JLA movie. Instead of laughing it off and not answering the question – like most people do – I say, “Of course, I’d be interested.” Why? Because it’s the closest thing to an honest response I can give a hypothetical question.

I don’t like when actors (or athletes… or anyone) is / are falsely deferential and act like they’ve never considered their next career move. Really? The public is expected to believe that there aren’t any aspirational elements attached to your career? The public NEVER buys that.

I’ll talk enthusiastic and honest over rehearsed and disingenuous. I’m not talented enough to pull off the latter. And neither is anybody else.

So there you have it. Stephen? Thanks. DC, WB? In the words of a certain starship captain, “Make it so.”