As if names like Colin Donnell, Susanna Thompson, John Barrowman, Josh Segarra and others were not enough, Warner Bros. has confirmed in a shared exclusive to GreenArrowTV and another outlet that Willa Holland (Thea) will indeed be back in Arrow Season 8!

Willa’s return had been rumored for a while and the number of episodes she is returning in is not yet known, though we are hearing she makes her return in the third episode of Arrow Season 8 which is called “Leap of Faith” and was directed by Katie Cassidy Rodgers.

“We are thrilled to have Willa back in our final season,” Executive Producer Beth Schwartz said in a statement. 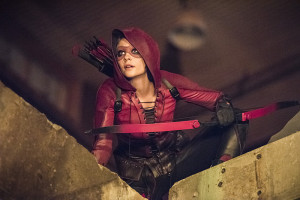 Willa Holland made her Arrow debut in the show’s very first episode which also served as an introduction of the Thea Queen character who did not appear in the comic books. Originally portrayed as a wild rich girl who would get herself in trouble, the character saw an evolution that included learning who her actual father was and becoming an archer superhero herself as “Speedy.” Willa departed the show as a series regular in Season 6 and since then had only been seen in the 150th episode retrospective “Emerald Archer” in Season 7.

The episodes of Arrow Season 8 that lead to the Crisis on Infinite Earths crossover are a series of the show’s “greatest hits” and will take Oliver Queen to places like a Starling City where people like Tommy are still alive, and even Nanda Parbat. The final season of Arrow premieres Tuesday, October 15 on The CW following The Flash.