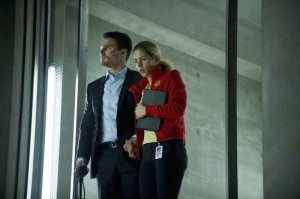 Wendy Mericle will soon have an Arrow promotion.

As announced on Twitter yesterday morning by Marc Guggenheim – who welcomed her to the world of Twitter @MericlesHappen – the current Co-Executive Producer Mericle will soon be the show’s co-showrunner, we’re assuming alongside Mr. Guggenheim.

We reached out to the studio and the network for more details but haven’t gotten a response. Otherwise, we would have posted about this sooner.

Mericle’s credits include a lot of good shows including Everwood, Jack & Bobby, Eli Stone, and Desperate Housewives. She also dipped into the DC world years before Arrow with a writing credit on the Smallville episode “Fanatic.” She’s written a lot of fan-favorite Arrow episodes already, including “Darkness On The Edge Of Town,” “Crucible,” this week’s episode “The Fallen,” and ten more.

We wish our congratulations to Ms. Mericle and look forward to grilling her for spoilers at press events. 🙂