Warning: Spoilers regarding the December 3 episode of Arrow titled “Unmasked” are within!

The Arrow episode “Unmasked” lived up to its title within the first few minutes of the December 3 episode.

As the episode began, we saw a character with a similar workout regime to Oliver’s, though it’s not someone we have seen on the show before. She sees a TV report about Oliver Queen’s release and looks intrigued. We then see this character “suiting up” – she is the new Green Arrow!

The actress playing this role — and she is listed as a series regular, by the way — is Sea Shimooka. She’s a talented newcomer who was named “Outstanding Achievment in Studio” by the head of Stonestreet Studios at NYU. She also starred in a film called Strangers At Night.

So who is this new Green Arrow, most likely?

Well, we know she has a style and training that is familiar to Oliver And then there’s the whole bit about visiting Robert Queen’s grave at the end of the episode…. and calling Robert Queen “Dad.” 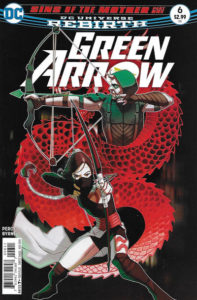 “It turns out Oliver Queen’s a lot more like you than I thought,” she said. “More like me, too. But I’m not giving up. Not ever.”

If we were betting people… we would guess that this is Oliver’s half-sister from comic book canon, Emiko Queen…. and that she is devoted to her father’s mission much like Oliver was in the series’ early days.

Emiko was first introduced in Green Arrow comics in 2013’s Green Arrow #18. In that storyline, she is the child of Robert Queen and Shado. If she has a similar parentage — which would require some powerful math and probably make Celina Jane’s Shado very young when she was conceived — that means it is very likely she was indeed trained by Yao Fei, who would be her grandfather.

It’s also curious to note that earlier in the season, we had some odd names revealed, such as when Oliver brought up the other guy on the life raft from the Queen’s Gambit. Could this character have also played a part in her back story?

In any event, the name “Emiko Queen” has not been said on screen yet, but it’s looking like this character — who has been featured pretty heavily in the “Rebirth” run — is now a part of the TV canon, giving Oliver Queen a sister once again after Thea’s departure last season.

On our recent visit to the Arrow sets in Vancouver last month (even though the interview was conducted at the CCPD set of The Flash), Stephen Amell was asked if there might be a new family member/ coming that he cannot afford to lose.

“He’s lost that person a couple of times, but then he always seems to gain someone new, [like] William or Felicity,” Stephen said. “But I don’t know. He just doesn’t have a lot of people left to lose, so hopefully he gains someone along the way, or, a few people.”

You can watch video of Stephen talking about that below.

So, no, the new Green Arrow isn’t William from the future, or Roy, or Tommy Merlyn, or Kat McNamara who also joined the cast in tonight’s show as “Blackstar”… but instead someone else with ties to Oliver Queen’s mission. We can’t wait to see what is coming next for her.

Come talk about “Unmasked” and the reveal on our Arrow discussion forum!