UPDATE: Stephen Amell referred to Oliver’s new costumed persona as Green Arrow. It remains to be seen if that is official. – MT

Tonight as part of Warner Bros.’ Night of DC Television event, the new costume to be worn by Stephen Amell in Arrow Season 4 has been revealed.

Season 4 premieres October 7 on The CW.

Here’s what they had to say about it: 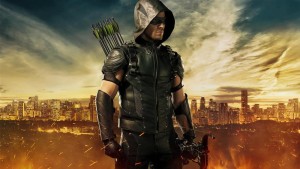