Stephen Amell this weekend did a convention appearance at the Salt Lake Comic Con with a Q&A moderated by someone special to him – his wife, Cassandra Jean Amell!

You can read what he had to say when asked about an Arrow and Supernatural crossover here, but right now, the focus is on another of the best questions from the nearly hour-long Q&A.

Notably, if Stephen could bring back any character from a previous season, even if they’re dead, who would he bring back? 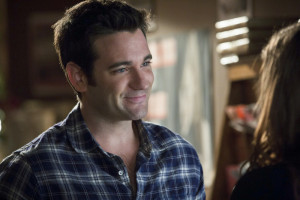 “For me, it’s always Tommy Merlyn.” Amell revealed, before saying that he and his wife recently got to visit Colin Donnell in Chicago (where he films Chicago Med) and catch up. “It’s always great to see him. We’ve forged a really great friendship and have been lucky enough to stay in touch, whether he’s making a trip back in Vancouver, or I’m filming in New York. When I was filming Turtles in New York, we went to him and Patti [Murin]’s wedding.”

Why Tommy? “I feel like, as great as the emotional significance of him dying in the season one finale was, and as much as that impacted and sort of reverberates through the show, I really would’ve loved to see what happened to that character because obviously, the lore of Tommy Merlyn is that he becomes Oliver’s greatest nemesis,” Stephen said, referring to the character’s fate as Merlyn the Dark Archer in the comics, a role taken by his father in the show.

Maybe Tommy became a dark archer on another Earth? There are so many to choose from!

Arrow Season 6 is here in just a few weeks, October 12 on The CW. You can see photos from the season premiere here. Video of the Q&A can be found below.