He-Man himself Dolph Lundgren makes his first appearance on tonight’s episode of Arrow as Konstantin Kovar, Oliver Queen’s adversary in the Russian flashbacks. The not-so-expendable movie star is apparently making multiple appearances on the show based on the impression he first made on the series. 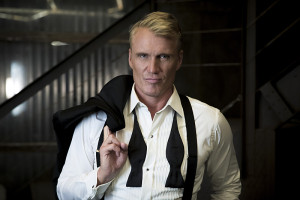 At the Arrow 100th episode red carpet, we asked Executive Producer Wendy Mericle what it was like to have the cinematic icon on the series. “I’m a huge Rocky IV fan, so that was amazing,” Mericle said. “I don’t think anyone was more excited than Stephen Amell that we were having him on the show, and you can look forward to some really bad-ass, great fighting sequences,” she promised.

More recently, at our visit to the Arrow set, Stephen Amell himself also had great things to say about working with Lundgren. “It would have been a missed opportunity, in the last year of these flashbacks, to not have a really worthy adversary, and we found that in Dolph, which is why he’ll be around for a while,” he explained. “It’s been a blast to work with him. It’s been awesome.”

You can see Lundgren in his first Arrow appearance in “So It Begins,” TONIGHT (November 9) at 8PM ET/PT on The CW. Official photos from the episode can be found here.