With an upcoming episode title like “Irreconcilable Differences” and a lot of secrets floating around it’s probably not surprising that a possible rift in Team Arrow may be on the horizon.

GreenArrowTV was recently part of a set visit to the Arrow stages in Vancouver, British Columbia where we were part of a group that was able to talk to the cast and get some intel about what’s coming up. One of those interviews conducted was with the “Green Arrow” himself, Stephen Amell, who expanded upon what might drama may be coming up for the team. 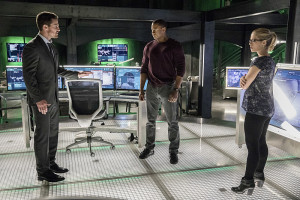 “Despite how useful and exceptional the new team members have been, they are still the new team members. In an upcoming episode – it’s not for a little bit – we discover that there’s a fracture on the inside,” Stephen teased. “It threatens to split Team Arrow down the middle of the original members and the newbies.”

Stephen also talked a bit about how Oliver is taking more of an inclusive approach in dealing with the members of his team.

“One of the things that I’ve really been trying to do as Oliver this year is really be inclusive,” he said. “There have been scenes where it’s still very season one, two, three, four where it’s just me barking orders. We always try and change that around a little bit. That’s like a remnant of an earlier time for the character. We always try and massage that a little bit so it does seem more collaborative,” he added.

Which isn’t to say that the fallout is originally handled quite perfectly for the actor. “I’ve been really pushing back hard against some of the way we have handled the fallout between there being a small fracture in the team, because in my mind myself, David and Emily, as our characters, we make a decision, but we make it together, and I was finding that the newbies, all their blame and anger was directed totally at me, and that didn’t track with what we were playing,” he shared.

“I don’t mind people being mad at Oliver,” Amell assured. “I don’t mind Oliver making mistakes. People being pissed at him is fine, so long as it is warranted. If it doesn’t make sense in terms of the context of the story, then I tend to push back.”

You can watch video of Stephen’s interview below. Arrow airs Thursday nights at 9PM on The CW.