The upcoming four-show DC TV crossover, airing in late November on The CW, already had our heroes uniting for the wedding of The Flash’s Barry Allen and Iris West…. apparently, those two aren’t the only ones tying the knot in “Crisis on Earth-X.” 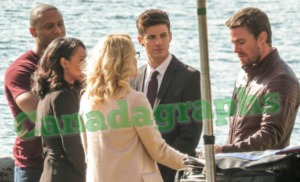 Supposedly happening in the fourth chapter of the event, on DC’s Legends of Tomorrow, stars Stephen Amell, Grant Gustin, Emily Bett Rickards, Candice Patton, and David Ramsey were caught by Canadagraphs earlier… filming what looks to be a double wedding. This double wedding – featuring Barry & Iris and Oliver & Felicity – had been rumored for weeks.

The studio and network do not comment on paparazzi-type photos, so obviously we don’t know any more about what is going on here. Large outlets including ComicBook have covered this photo.

Arrow Executive Producer Marc Guggenheim had talked before about “a specific trajectory” for “Olicity,” and apparently this is it. (This also means Felicity definitely survived the explosion at Lian Yu, as if there was any doubt, as did John Diggle.)

The four-show crossover airs November 27 and 28 on The CW.