cover countdown44 days until Arrow Season 544 Green Arrow #801 GreenArrowTV81 Mike Grell12
80 DAYS are left until Season 5 of Arrow, and we've got a look at another classic cover.

Since there had sometimes been confusion about the covers without any context, this year we’re going to describe the comic book covers that we are showing. The issue numbers on the comics will correspond to the number of days left before Season 5 begins. For example, there are 80 days left until Arrow Season 5, considering The CW has announced an October 5 premiere date. 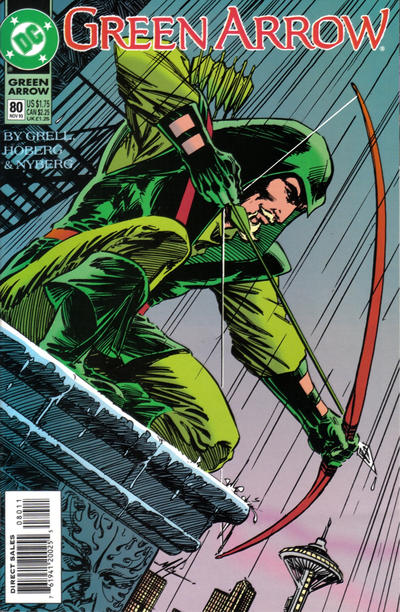 The fantastic cover of Green Arrow #80 came from the pencils of artist Mike Grell who is one of the most influential Green Arrow comic book creators in history. Grell, who first drew Green Arrow as part of the Green Lantern/Green Arrow series in the 1970s, reinvented the character for a more mature audience with Green Arrow: The Longbow Hunters and that association with the character continued for the first 80 issues of Oliver Queen’s longest-running comic book series.

In Grell’s run on the character, the name “Green Arrow” was barely mentioned at all and important characters like Eddie Fyers and Shado became part of the mix. Of course, Oliver’s complicated relationship with Dinah Lance (Black Canary) was also a recurring factor. The monthly Green Arrow series by Grell is also currently being collected by DC Comics; those trade paperbacks start here and are recommended for any Green Arrow fan.

80 days are left to the Arrow season premiere – be sure to come back daily for more countdown posts! Past “Cover Countdown” posts can be found here.