In yet another video from this year’s Arrow Comic-Con press room, we have Executive Producer Greg Berlanti talking about several topics important to Arrow fans. Here’s the video, and some highlighted details follow if you don’t want to watch the whole thing: 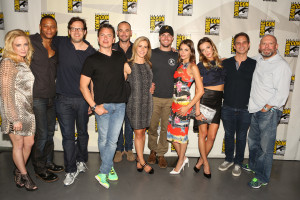 – On Oliver’s Season 3 outlook: “Last year, it was ‘all right, I’m going to give up killing;’ this year it’s about having an integrated life. Can he really have a life, or is he just out there to fight crime? Can he introduce other elements into his life?”

– About Oliver losing his fortune: “It’s definitely a new way of life for him. They’ll find some other economic means from surprising places,” he teases. “It’s not like The Broke Years. You don’t feel that, I don’t think.” Despite the loss of funds, we can expect Team Arrow to stay in a new lair; however, Oliver Queen does need to find a new place to live.

– Olicity (Oliver & Felicity): “In the finale, we like to hint at some of the things we hope to deal with in the next season, and definitely, there tension – romantic and otherwise – has been coming to a head, and I think so much of who she is and what she means to him, in a lot of ways, represents a whole other life. And so, we’ll get at some of that stuff in the beginning episodes,” Berlanti promises. 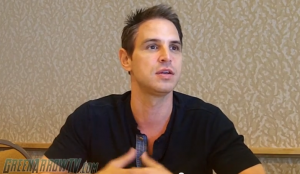 – Someone new is coming to town with a bid for the company. “There’s a new gentleman, Ray Palmer, who wants to buy Queen Consolidated, in specific, for their tech division. He finds things out pretty soon, that there was an IT woman there who was then Oliver’s assistant, who seemed to have a bizarre trajectory with the company, so he goes looking for her, and wants her to be part of the company.” Ray Palmer will be played by former Superman Brandon Routh.

– What’s coming for Thea? “The great thing with both Willa and Thea is to really show a whole new side, obviously, to her. We always say ‘this is this person’s island,’ but this year really is her island, I think in terms of showing some of her growth and physicalization of her abilities,” Berlanti tells us. Regarding Thea/Malcolm interaction: “They’re certainly a blast to write. It’s a unique relationship. We haven’t had anything like it on the show,” he says.

– Will Malcolm and Oliver have to team up to stop a common foe? This interview came before it was announced that Ra’s al Ghul was coming in, so Berlanti kind of changed the subject. He did say this, though: “Malcolm is who he is, and so, he’ll always sort of be the devil you know, but obviously he has this relationship now with Thea that we’ll learn more about. I think that those complexities are a lot of what Oliver is going to be dealing with, too, this year. In some ways, he’s kind of a sheriff, and a bad guy’s come back into town, but he can’t quite get rid of him. Obviously, the first step of that is going to be Oliver finding out that he’s alive.”

– With all of these characters coming on, might we see a sort of Justice League? “I think in success – we never know – you always hope the shows work well enough that we could do that, but definitely, we’re closer to that than we were last year. So hopefully we’ll keep moving own a path like that, but we have to keep making the shows great individually,” Berlanti says.

– Someone else is coming: “There’s been a lot that’s been announced this year, but there are still at least hopefully kind of one big one in the back half of the year – another DC person that we hope to bring on.” We here at GreenArrowTV wish it would be Nightwing, though we’re pretty sure it’s not Nightwing.