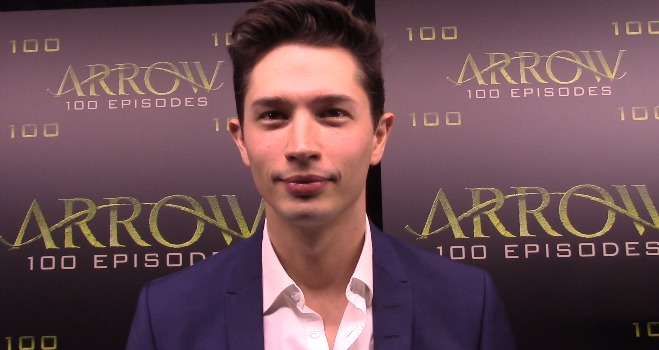 Continuing our string of interviews from the Arrow Episode 100 “Green Carpet,” the spotlight now falls on the “Ragman” himself, Joe Dinicol, who has been playing Rory Regan, one of the show’s latest recruits in the fifth season. Joe has long been a favorite around these parts (RIP The L.A. Complex) and we spoke with him a bit about joining this cast so soon before the 100th episode approaches. 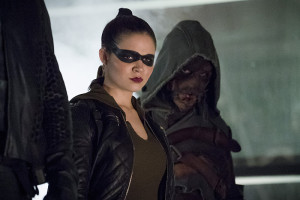 In the interview, Joe says that joining at the same time as some other new recruits is like starting a new high school (“You’re kind of nervous, but you know everyone else is kind of nervous,” he says), but has nothing but positive things to say about his new peers. “We’ve all become very close, as we all learn to navigate this huge Arrow world that we’ve all been thrust into. Everyone is so lovely, and hard-working, and welcoming,” he says. 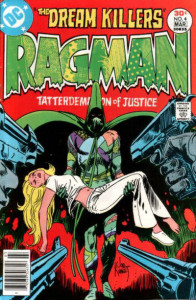 And what will he and the other recruits be doing in Episode 100 and the upcoming crossover? “I can say we’re all working together, to help with this Invasion. Doing what we can, especially when there’s Supergirl and The Flash to do a lot more of the heavy lifting, probably, but I will say that we all have different reactions to the other superheroes coming in,” he teases.

We also spoke about Rory’s reactions to Havenrock, which at the time this interview was being done was still yet to air. (In other words, “the next episode” is NOT a reference to episode #5.9 or anything)

“It’s a very lucky job when you get to work as an actor at all, and then you get to do something like this that everyone both in front of and behind the camera really appreciates, and the fans… it’s just so rare. We don’t do it to do it in a vacuum. I want people to feel the way I felt when I saw the first Batman movie or Back to the Future. Knowing that so many of the people watching enjoy it and it brings them together… it’s a cool thing to be a part of,” he says.

You can watch the entire interview below.