Prometheus Is Back In This Year’s Crossover 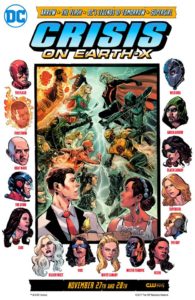 You can’t keep a good villain down.

It appeared that he was on the cover art for this year’s four-show DC TV crossover, “Crisis on Earth-X”… and now, EW has confirmed that the villain Prometheus is indeed part of that cadre of villains from Earth-X.

But, in a twist… apparently the person under the mask is not Josh Segarra a.k.a. Adrian Chase. EW is speculating that the man under the mask might be Paul Blackthorne’s Quentin Lance, which would give the Lance family another otherworldly villain… but we’re going to throw out an even crazier speculation:

What if he’s Tommy Merlyn?

After all, Tommy was long speculated to be Prometheus last year…

Colin Donnell is currently busy filming Chicago Med, but if the character is largely under a mask, anything’s possible, right?

The other possibility could be that he’s an otherworldly Roy Harper, as Colton Haynes has recently said we’ll be seeing Roy again very soon.

In any event, we will find out for sure when the 4-show crossover between Arrow, Supergirl, DC’s Legends of Tomorrow, and The Flash airs November 27 and 28 on The CW.