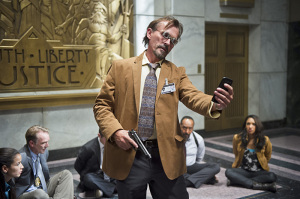 Robert Knepper, who appeared in last season’s Arrow episode “Time of Death,” will be playing William Tockman, The Clock King again… but on a different series.

He’ll be appearing in the seventh episode of The Flash, which airs November 25. Arrow might not be new that week, but at least something from that universe will be there!

Take a look at a gallery of images from his guest shot on FlashTVNews!