This is part of a series of articles about tonight’s episode of Arrow, titled “Eleven-Fifty-Nine.” If you are not on the East Coast and have not seen tonight’s show, read no further!

Arrow killed Laurel Lance tonight, and now her father, Quentin Lance (played by Paul Blackthorne) is starting to have gone through more kid funerals than the McCormicks of South Park. 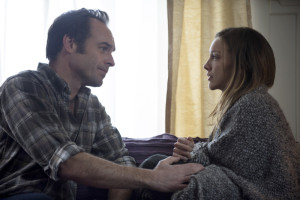 “It’s all getting a bit boring for Quentin, I’ll have to say,” he joked at a Q&A hosted by The CW earlier this week. “No more kid deaths, please!”

In all seriousness, Blackthorne told the room full of journalists that as a character, Quentin has a unique perspective on things like this. “It’s almost like Quentin’s point of view is almost like that of the audience, in terms of ‘what the hell is going on around here?’ With all of the outrageousness of this year, with the magic and all of this stuff… he can’t really take it on as a reality, but if this is the result of what’s going on, then I have to deal with it. He can’t really accept it, but he has to accept that it is happening,” he explained.

The previous events of Arrow will make reconciling these elements difficult for Quentin. “With these deaths, whether it’s Caity [Lotz]’s reprisal through magic and Lazarus Pits and all the rest of it… it’s all a bit hard for Quentin to reconcile as something that could truly be happening,” Paul said. “It is happening; therefore, he’ll deal with it. But this one… we started things off with Caity [Sara] being ‘dead.’ So there’s always been a world of ‘Sara’s dead, oh, but she’s back, but she’s dead again. But ‘oh my God, she’s back again.’ But it’s always based in her being dead since we began. This death, of course, is just devastating for Lance, because this is not the one that was ever supposed to happen. How could this be on the books? Personally, I was almost as devastated as Lance, to be honest, with the news of this happening, because Katie and I have had such an amazing working relationship that it actually really is hard to accept… that I’m going to go into work without this fabulous lady to work with. So that, as an aside, is slightly annoying. But in terms of Quentin, he’s going to have to pick up the pieces, and not pick up a bottle, and reconcile what’s left in his life. Obviously with that, he’s got the Arrow ‘family,’ and that will be where he’ll have to find his anchor now, from here on in, without his beautiful daughter.”

Regarding the “annoying” comment said earlier, Blackthorne felt the need to qualify what he meant. “In terms of when you find out news like this… it’s not annoying, it’s really devastating that you’re going to lose a cast member such as Katie, but at the same time, it was such a shock. I mean, certainly to me, and I think to everybody, when the news came out. We were thinking ‘we were right in the middle of this thing and it was shocking. What’s it going to be to the audience?’ And in terms of  fantastic story, it’s like WHAM, you know. And if that’s not what story’s about, then what is it about? It’s an amazing turn to throw at the audience. People aren’t expecting it, and it’s fantastic. If it shocked us that much, what’s it going to do to the audience?”