Add another to the list of actors from past DC TV productions who’d be willing to suit up for Crisis on Infinite Earths — and this is one that a lot have wanted to see.

Before Stephen Amell put on green leather and fought against those who failed his city, Justin Hartley starred for multiple seasons on Smallville as Oliver Queen, TV’s first Green Arrow. Tom Welling and Erica Durance of Smallville are already set to appear in this year’s DC TV crossover… but what about Hartley? International Business Times got an answer. 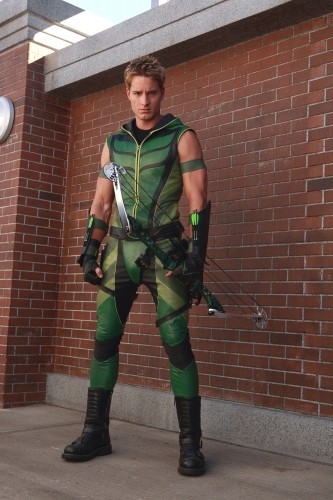 “I don’t know. I mean, that’s not really up to me. Yeah, we’ll see,” Hartley told the site on the red carpet celebrating his digital October cover of DuJour in New York City on Tuesday.

“I always said that I would go back into that world and play that character if it was the right thing. I’m open to doing anything that makes sense, not just doing it for the sake of doing it,” Hartley contineued. “But they’ve been doing such a great job over there, I don’t think they would do that. I think if it made sense they would entertain it, and if it doesn’t and it’s not in the cards, then it’s not in the cards.”

Hartley has also recently told DuJour that he does want to play another comic book character now that he’s older.

“I had a run as a superhero, and I am kind of dying to do that again, because that was a long time ago, and I wasn’t really a man,” he said. “I’ve had so many life experiences since then that I think I could bring a whole other level to that.”

As to which? Justin didn’t give an example, but he did talk about why superheroes are interesting to him.

“They’re all so interesting when you get to the fabric of them and you see what the backstory is behind all these characters,” Hartley explained. “They’re all kind of grounded in reality and they deal with things that we—and everyone who walks among us—deals with. There are a lot of interesting things about these characters, so I’m open to anything,” he said.

Crisis on Infinite Earths is filming now to air in December and January on The CW. And here at GATV we are very much hoping to see Justin involved, even if it did appear that he was already dead in the Elseworlds teaser.

Thanks to Andy for the tip.