Olicity In Season 5? Here’s What Stephen Amell Has To Say

ComicBook.com had a report and video from the recent Wizard World convention in Philadelphia, where Stephen Amell (Oliver Queen) was asked straight up if “Olicity” will be getting married anytime soon. 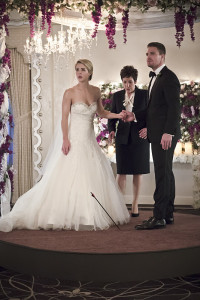 “I don’t know,” he said. “I know that it was important, especially at the end of season four with everything that happened and with Laurel Lance’s death that their relationship get put on the back burner because I think that there were more pressing issues, obviously,” he continued.

“I don’t know what’s gonna happen in Season 5. I do know that… I don’t believe that they begin Season 5 together, so we’ll see where it goes from there.”

And what does Stephen think of Felicity’s choice to walk away from what they had? “I felt like she was relatively quick to walk away but she’s a fictional character,” he said. “She can do what she wants.”

You can see video of Stephen answering the question below. Arrow returns for its fifth season this Fall on The CW.