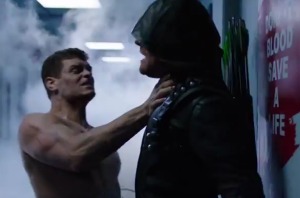 The CW has released a new extended version of the latest Arrow Season 5 trailer, and the most awesome part of it is that we get an even better look at Rick Gonzalez in his Wild Dog costume… one of the most faithful adaptations we’ve seen from comics to screen.

There are many other cool things including Cody Rhodes (the man formerly known as Stardust), who appears in Episode 3; and Chad L. Coleman as Tobias Church. There’s also some new discussion with Curtis Holt (Echo Kellum) about his decision to physically join the hero business. We’ll try and have some screencaps soon, but for now, enjoy!

Arrow Season 5 begins October 5 on The CW. Photos and a description for the season premiere can be found here.