Tonight The CW will bring us something to be thankful for — a new episode of Arrow airing on Thanksgiving!

The episode is called, appropriately enough, “Thanksgiving,” and we we part of a group of journalists who spoke with Stephen Amell about the episode earlier this month in Vancouver. 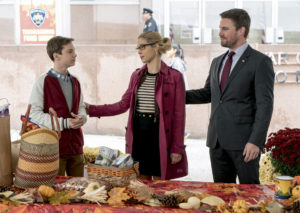 “It sort of works like every other holiday or moment that should be fun, which is to say that it goes to shit almost immediately, like in act one. But, it ends on a relatively happy note,” Stephen teased.

The episode’s description talks about how “Oliver, Felicity, and William spend the holiday together” and Stephen seems happy with the family dynamic.

“I like her being part of this dynamic,” Stephen said. “I think William’s character is at a nice age, so that we’re not getting into, “Okay, who is going to change a diaper at 3 a.m. in the morning?” It’s more like he’s a young adult, he’s mature, he’s having his moments, but he’s adjusting well and she’s helping with that. That’s been great.”

Does Oliver fail this turkey?

“No, he doesn’t fail his meals,” Stephen assured.

Turkey and family moments aren’t the only things that happen in “Thanksgiving” — there’s also Samanda Watson’s investigation which gets Oliver into more trouble tonight.

Stephen also had a lot of good things to say about Sydelle Noel, who plays Samanda Watson.

“I’ve really enjoyed Sydelle,” Amell enthused. “They always write Oliver and her as having these tense standoffs. But, starting in episode two, when I go in there to talk to her, I don’t know what it was, but I felt like my character just wanted to smile and border on being almost smug. Or, just competent. I feel like that is something we’ve tried to bring in this year. This is a guy that’s more comfortable in the public space now and in the public eye. He’s just more comfortable in his skin and hopefully that’s shown.” 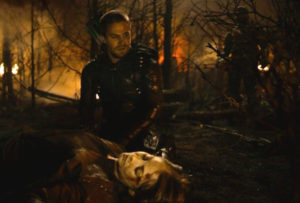 And speaking of family, might we see the return of Thea Queen (Willa Holland) anytime soon?

“Well, Willa has been back with us recently,” Stephen teased. “I don’t think it’s a big reveal to suggest that series regulars, when they are in comas, tend to wake up eventually. I can’t really tease a ton. I can’t really tease a ton of that. But, assuming that Willa is back at a certain point, I think that there’s some interesting things we can do for her character. I know I had an idea that I pitched today, actually.”

You can watch video of Stephen’s interview below. As a bonus — you can also find videos of Emily Bett Rickards talking about William and not offering any real hints about “Thanksgiving” as well! Happy Turkey Day to everyone who celebrates! “Thanksgiving” airs at 9PM ET/PT November 23 on The CW.