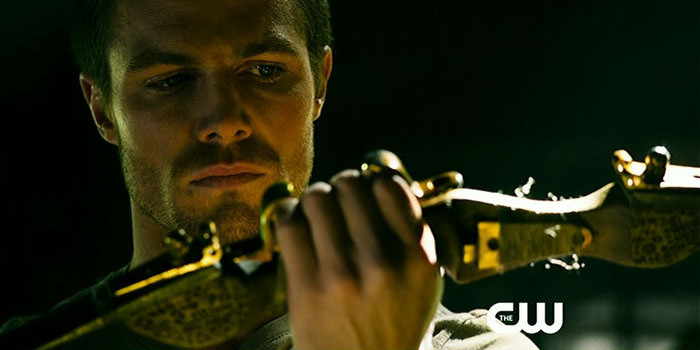 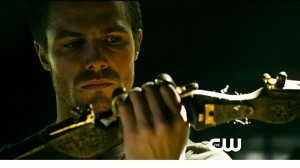 Marc Guggenheim is a well-known writer and producer whose past TV and movie credits include Law & Order, Brothers & Sisters, FlashForward, Eli Stone, Green Lantern, and No Ordinary Family. In the comics world, you could find his work in the pages of Resurrection, Young X-Men, The Flash, Justice Society, and some especially great issues of The Amazing Spider-Man, where it could be said that his stories hit the “jackpot.”

Now, Guggenheim merges those worlds of law, order, and comics together as a writer and executive producer for Arrow, which — in case you were somehow unaware before reading this — tells the story of Oliver Queen, the man best known to comic book fans as Green Arrow. The show explores the past and shows what happens as the character, played by Stephen Amell, stops crime and chases out corruption in Starling City.

We spoke with Guggenheim last week at the press room roundtable at this year’s Comic-Con in San Diego, and here are some highlights. You can read GATV’s other Arrow Comic-Con interviews here. Look for Katie Cassidy and David Nutter in the coming days!

Please do not copy and paste this interview onto other websites. Instead, just link to GreenArrowTV! Thanks!

“In terms of secrets, for us, the secret is Oliver,” Guggenheim explains when asked to reveal secrets to the journalists at the table. “One of the things we’re doing is, we don’t really consider the show a superhero show. We consider it more like a hero show; more like a crime thriller, and as with any with crime thriller, you’re going to have a mystery. Except unlike CSI where it’s a body drop at the beginning of every episode, the mystery is Oliver. Oliver is the case of the week, basically. Each week we’re peeling back the layers of his character, both in the present and in the past. We’re going to be continuing the flashbacks into the series, so you’ll get to see what happened to him on the island, and it won’t always be the things that you expect. We’re trying to always surprise the audience, so the mysteries and the twists come out of character as opposed to out of plots.”

On the subject of character backstory and flashbacks, will we see what exactly the deal was with Oliver’s father, Robert Queen? “The network asked me the same question,” Guggenheim says. “The network asked me, ‘are we ever going to see flashbacks outside of Oliver’s perspective, in that linear sense?’ And I’ll give you the same answer I gave the network, which is [that] we feel like right now, we’re doing a version of the show where it’s present day into flashback, and we need to set that template and teach the audience to watch the show that way, before we start messing around with other non-linear devices like changing the POV on the flashbacks and going further back than the five years, things of that nature. It’s like if you look at LOST. When LOST premiered, it was very straight forward, present day and flashback, and then once they set that template and taught the audience how to watch the show that way, then they had the freedom to start playing around. So once we’ve developed that freedom, yes. We’re going to mess around quite a bit. I do think one of the mysteries of the show is when Robert says to Oliver on the raft [in the pilot] ‘I’m not the man you think I am.’ Well, hopefully it makes you go ‘what type of man was he? What’s going on there?’ And that’s certainly part of the mystery. But one of the things that you should watch the show for is, there’s other ways of advancing that mystery and answering that mystery, other than seeing flashbacks for Robert,” he says. 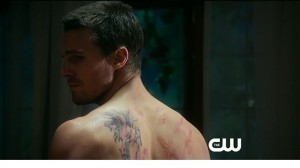 Although we know all about Oliver’s parents, and we meet Laurel Lance’s father, the question of Laurel’s mother is left ambiguous. Do the producers have a plan to tell that story? “Yes. Actually, we know exactly what happened with Laurel’s mother. We’re not sure which episode we’re going to do it in — it will probably be in the first ten, and it’s a great question, because a lot of people don’t remember that Laurel has a mother. But she does, and it’s an interesting story that relates to Oliver,” he says. Whether or not Laurel’s mother will share the backstory from the comics remains to be seen, but Guggenheim does tell us that there will be frequent references to comics lore. “In just about every episode, we’re bringing in something from the comics. Sometimes it’ll just be a little Easter egg; other times it’ll be an entire character. There are various different things from the comic books we’ll be bringing in. Stay tuned.”

In the present day, family is an important factor that we will see, as Oliver, now back in Starling City, will be doing a lot of interacting with his mother, Moira, and his sister, Thea. “You’ll see a lot of that, actually, in episode 2, and certainly going forward,” Marc says. “Part of the raison d’etre of the show is Oliver’s relationship with his mother and his sister. With respect to his mother, there’s a lot more going on with Mom than meets the eye, just as there’s a lot more going on with Oliver than meets the eye as Moira’s concerned. So how can you have a relationship where both people are hiding secrets? With respect to Thea, it’s also a complicated relationship. It’s complicated in a different way. Thea’s going out and partying and doing drugs and drinking, and Oliver wants to be the big brother, and to stop her from doing that. The problem is that, in order to protect his identity as the Arrow, he has to pretend to be the guy he used to be. So, she’s constantly saying ‘you’re a hypocrite’ because ‘who are you to tell me not to go out and party and booze it up?’ But he can’t tell her ‘I’m not actually going out clubbing; I’m going out clubbing people on the head!’ He can’t say that. So it’s that complexity. one of the things that is part of the DNA of the show is the emotional complexity, the emotional resonance of the relationships between the characters. It’ll start off with Oliver relating to Thea, and Oliver relating to Moira, etc., but as the show evolves and grows in the series, we’ll start putting other characters together. Like in episode 3, Moira and Thea have their own story. So watching the characters combine and interact with each other in ways that independent of Oliver, I think, is just as interesting as when Oliver is involved. Part of the show is a soap opera. Part of the show is a character drama. And that’s, I think, one of the very importants of the show. It’s not just Oliver beating up bad guys every week.” Oliver will also be having scenes with his new stepfather, Walter Steele, played by Colin Salmon. “I think Oliver and Walter’s interactions tend to be pretty surprising,” Guggenheim says. “They obviously have a little bit of a chilly relationship in the pilot, and watching the two of them find footing with each other is one of the more interesting things that happen in the first three episodes.” 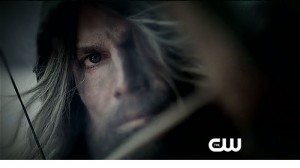 “Not unexpected from the pilot, but also, just a great relationship is the Oliver-Diggle relationship,” Marc Guggenheim says of Oliver Queen’s bodyguard, played by David Ramsey. “That worked very well for us in the pilot. We’re having a lot of fun writing to it. Diggle’s not a dumb guy. I don’t think I’m spoiling anything – it’s not a question of if he is going to find out Oliver’s secret; it’s when and how, and watching these two men who are equals in many respects, in terms of their abilities, and in terms of their intelligence, facing off against each other in this little chess match that they’re having, I think that’s part of the fun of the first three.” And on a Diggle note, Guggenheim spoke a bit about Green Arrow: Year One, the graphic novel by writer Andy Diggle and artist Jock that the producers describe as “proof of concept.” “When we decided that we wanted to tell, basically, five years’ worth of story on the island, we sort of looked to Year One as a great example that you can. You can tell a whole story that’s very fully fleshed out with Oliver just on that island. It’s both proof of concept that our idea in terms of flashbacks can work, but it’s also an inspiration. Tonally, it’s an inspiration. The very grounded nature of Year One, the fact that he doesn’t wear a hood because he thinks it looks cool; he wears a hood to keep himself from getting sun burned… while that’s not a beat we’ve taken and put into the show, that philosophy of ‘what are the real life explanations for some of the more comic booky elements.’ We felt like we were drawing enough inspiration for Year One that we felt we should name a character after Andy [Diggle], and so we did.”

Come back to GreenArrowTV soon for more interviews and be sure to visit our Arrow forum at KSiteTV to talk about what you’ve read!

“Make the show as good as it possibly can be” “